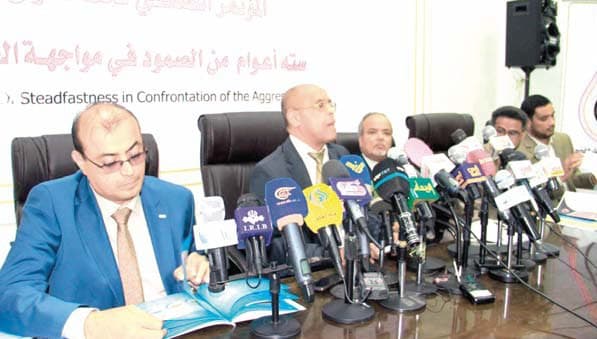 The Ministry of Transport on Monday said the total direct and indirect losses of the sea, air, and land transport sectors during the six years of the Saudi-led coalition war on Yemen amounted to more than seven billion dollar.

During a press conference held Monday in Sana’a, on the occasion of the passage of six years of the steadfastness against the Saudi-led coalition aggression, the Ministry confirmed that the civil aviation and meteorology sector had been subjected to unprecedented targeting in the region by the coalition, and its losses amounted to more than five billion dollars.

The deaths resulting from the closure of Sana’a International Airport were estimated at 80,000 deaths, while more than 450,000 patients urgently need to travel abroad to receive medical care and treatment, and the blockade exacerbates their suffering, according to the ministry.

The Ministry of Transport stated that the blockade had resulted in the absence of 120 types of medicines and medical solutions that were coming through the airports.

The statistics indicate that one out of every 10 patients dies on the road between Sana’a and Aden provinces or Sana’a and Sayoun city in Hadramout province, from those who have to travel by land to those airports.

The losses of the sea transport sector due to the direct targeting of the infrastructure of Yemen’s ports, including cranes and bridge cranes, amounted to more than two billion dollars, while the ports were disrupted by 80 percent of their activities as a result of the coalition bombing, according to the ministry.

The ministry pointed out that the coalition deliberately targeted and destroyed 1,083 trucks and fuel tankers, 4,490 roads and bridges, and 7,229 various means of transport, referring that the losses of the Public Authority for Regulating Land Transport Affairs exceeded 208 million dollars.