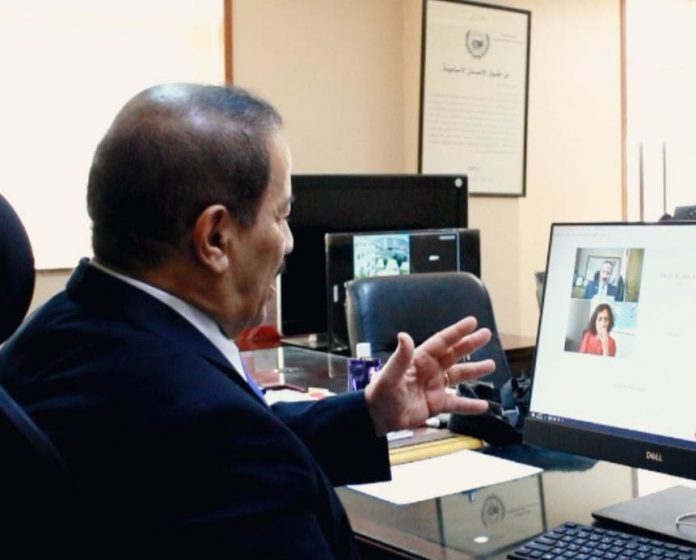 Foreign Minister of Yemen, Hisham Sharaf Abdullah, has on Thursday held a closed-circuit television meeting with the Chairperson of the Human Rights Committee of the European Parliament, Maria Arena.

At the meeting, Foreign Minister reviewed the suffering of the Yemeni people for the seventh ongoing year, due to a barbaric military aggression and the unjust blockade that is incompatible with any legislative or legal basis for any international treaty, convention and law, including Security Council resolution 2216.

Minister Sharaf explained that the US-backed Saudi-UAE coalition of aggression has violated all fundamental human rights principles by targeting and killing civilians, especially women, children and the elderly, and by destroying all economic resources and infrastructure of the Yemeni people, including their healthcare, education, water and electricity infrastructure.

The Minister expressed his appreciation for the resolution of the European Parliament adopted last February affirming that there is no military solution for the conflict in Yemen.

The European Parliament has also called for an end to the war and the lifting of the blockade, with a view to achieve a comprehensive and sustainable political settlement, and a complete withdrawal of foreign forces on Yemeni territory and islands.

“The political leadership in Sana’a, represented by the Supreme Political Council and the Government of National Salvation, was serious about moving towards a just peace,” Sharaf affirmed .

The Foreign Minister stressed that any peace process towards a just peace has to be preceded by a number of basic humanitarian steps and the strengthening of confidence, through the implementation of a ceasefire and the lifting of the blockades on the port of Hodeidah and Sana’a International Airport, thereby creating a climate conducive to the success of political negotiations.

He noted that the financiers of aggression must stop funding their proxies in order to have a successful peaceful political settlement.

For her part, Maria Arena stressed the importance of a peaceful political solution as the only solution to face the repercussions of the humanitarian disaster in the Republic of Yemen.