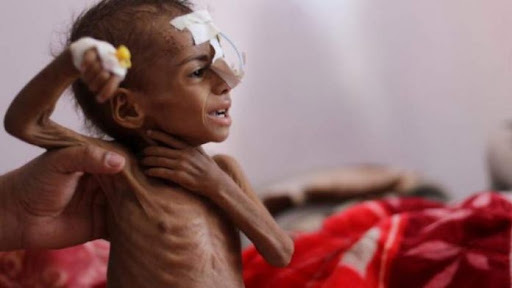 Yemen’s children are suffering increasingly as a result of Saudi-led aggression coalition’s war and blockade imposed on Yemen as the United Nations and international community are complicit in what is going on in the country.

“Yemen recorded one of the highest levels of acute malnutrition, with a devastating toll on children less than 5 years. Over 2.25 million children are projected to suffer from acute malnutrition during 2021. 8,525 children were saved from malnutrition from January until June 2021,” the World Health Organisation (WHO) said in a tweet on Sunday.

The United Nations revealed its apparent bias towards the coalition when Saudi Arabia and the UAE were removed from the list of child rights violators, despite clear crimes committed by the coalition against Yemeni children.

A number of observers believe that the contradictions of the United Nations in covering up the killing of Yemeni children while at the same time lamenting over the these of these children, reveal a new level of moral degradation.