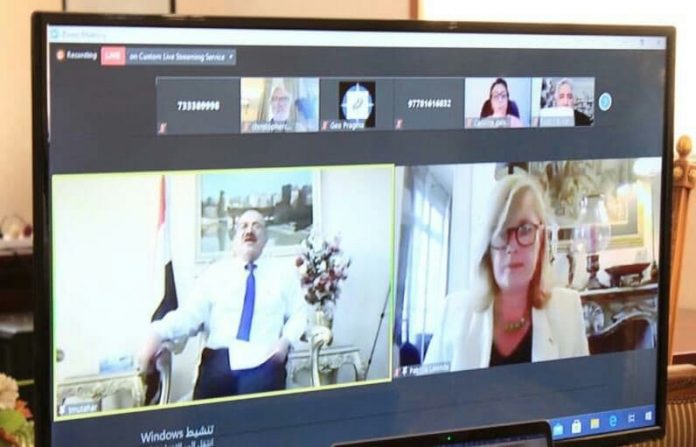 Yemeni Foreign Minister Hisham Sharaf said on Saturday that “Sana’a is open to all international and regional endeavours and efforts to end the aggression and lift the siege.”

This came during his participation in a high-level interactive circle discussion, through online communication, entitled “Yemen, the turning point,” which was held by the French Geopragma Research Group.

Sharaf reviewed, during the discussion in which a number of political, military, diplomatic and French academic figures participated, the details and backgrounds of the war on Yemen from a political, economic and military aspect, all of which confirms that there is no justification for the war on Yemen.

The Foreign Minister responded to a number of inquiries from the participants in the interactive discussion, which dealt with the crimes of the Saudi-led coalition since March 2015, including the targeting of civilians and the destruction of the infrastructure of the Yemeni people.

He pointed out that the blockade has caused the worst humanitarian catastrophe in modern times, and has affected all areas of life.

Sharaf affirmed that all endeavours to bring peace to Yemen are valued and appreciated by the political leadership in Sana’a, represented by the Supreme Political Council and the National Salvation Government.

Regarding the developments of events, Sharaf indicated that it is “not logical to link the humanitarian aspect to military, security and political files.”

“If the two Saudi-Emirati aggression countries, along with the international community, are serious about ending the aggression, it is important to take confidence-building measures, such as opening Sana’a airport and to stop obstructing the entry of fuel ships into Hodeidah port, in order to create the atmosphere for comprehensive ceasefire negotiations and a peaceful political settlement,” the Foreign Minister concluded.