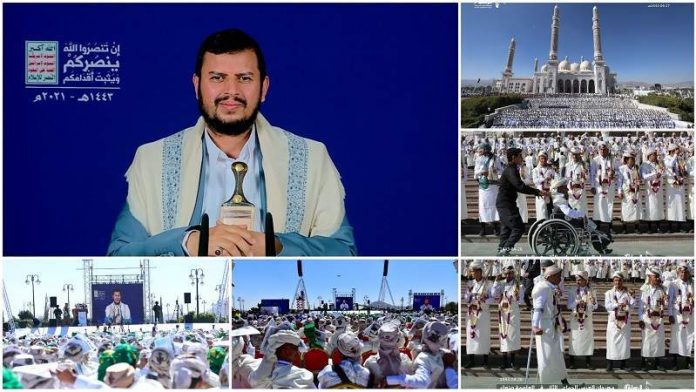 The Leader of the Revolution Sayyed Abdul-Malik Al-Houthi has praised the steadfastness and resilience of the Yemenis in the face of the devastating US-Saudi aggression and crippling siege, stating that the Yemeni people personify the principle of resistance against enemies.
The Leader’s remarks came during the largest mass wedding event in celebration of the wedding of 7,200 bride and groom, sponsored by the General Authority for Zakat in the capital Sana’a on Thursday evening.

“Our people embody the principle of compassion, cooperation, piety and solidarity, and represent an impressive example of social cohesion,” Sayyed Abdul-Malik Al-Houthi said. “Despite immense sufferings and challenges, brutal siege and dire economic situation, the Yemeni nation continues to tread its path to progress.”

“Today, we represent the principle of steadfastness in the face of enemies. All challenges that we are grappling with at the present time are the upshot of enemies’ conspiracies,” the Leader pointed out.

Earlier this week, Sayyed Abdul-Malik warned against seditious conspiracies and divisive attempts by enemies in order to establish their control over Yemen, stressing that the US-Saudi aggression continues to perpetrate brutal crimes in the country’s western coastal city of Hodeidah.

“Enemies are seeking to dominate Yemeni people through incitement of sedition and division,” the Leader said in a meeting with a delegation of Bayda tribal leaders on Monday evening.