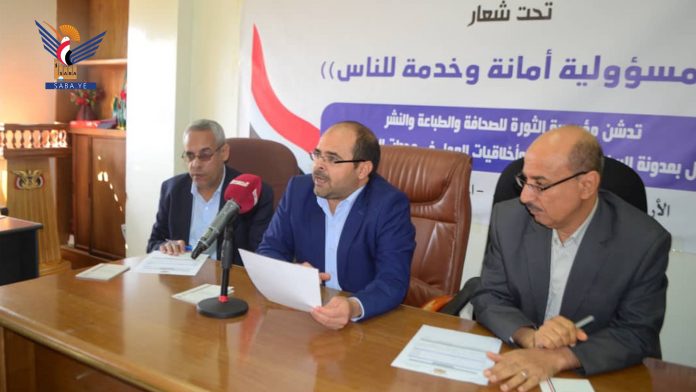 Al-Thawra Establishment for Press, Printing, and Publishing launched the Code of Conduct and Work Ethics in the General Office of the Foundation and its branches in the governorates.

In the inauguration, the Chairman of the Board of Directors – Editor-in-Chief, Abdul Rahman Al-Ahnoumi, considered the inauguration of the Code at Al-Thawra Foundation as a first step in the context of applying it to reality, in a way that contributes to the establishment of faith and moral standards, principles and rules of behavior and the promotion of professional values ​​that govern the employee’s relationship with his superiors, subordinates, colleagues and service recipients.

He stressed the importance of adhering to the content of the code, applying and practicing its provisions in practice, transforming them into realistic behavior, and realizing their importance in improving the level of journalistic, administrative and technical performance in the institution and its branches in the governorates.

Al-Ahnoumi pointed out that the Code is a set of principles, values ​​and ethics that help improve job performance and discipline. It is also a guiding and reference document for professional behavior and work ethics because it contains policies and standards that regulate the work environment.

The Chairman of the Board of Directors of Al-Thawra Establishment expressed hope for developing performance during the next stage, especially as there is a great interaction by the cadres and employees of the Foundation and their interest in the Code.