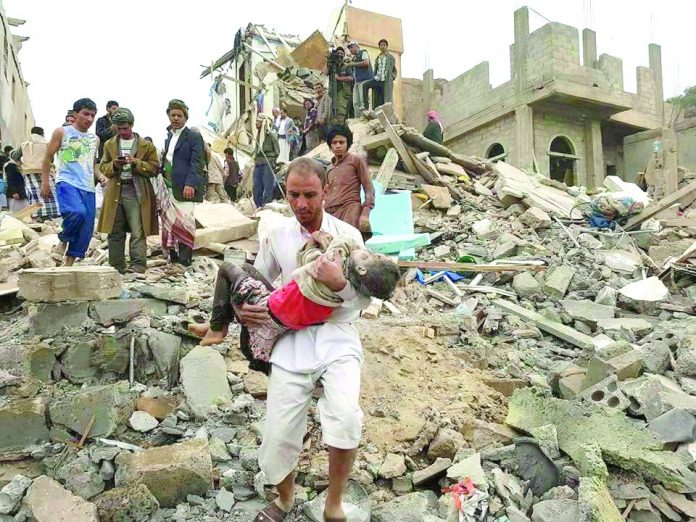 The number of women and children who have been victims of the direct bombing of the US-Saudi aggression over eight years has exceeded 13,437 dead and wounded, a rights group revealed.

Entisaf Organization for Women and Children’s Rights revealed on Sunday catastrophic figures for the repercussions of the aggression and blockade on Yemen.

“The children and women of Yemen are killed and their rights violated as a result of the aggression and the siege imposed by the US-Saudi aggression under UN and international cover,” the human rights organization said in a statement on the occasion of International Human Rights Day. “In Yemen, all the laws and charters launched by the United Nations have fallen. The international days that it declared have no longer played any role in preserving even a small part of the rights of women and children in Yemen.”

It pointed out that the number of the displaced rose to five million and 159 thousand and 560 displaced until the end of August 2022, including 740 thousand and 122 families. It noted that half of the displaced are women, 27 percent of whom are under the age of eighteen, which increases their risk of violence.

“With the lack of available shelter options, displaced women and girls suffer most from the lack of privacy, the threat to their safety, and the lack of access to basic services, which makes them more vulnerable to violence and abuse,” it added.

The organization added that one out of every three displaced families is headed by women, and the girls who support 21 percent of these families are under 18 years old.

It indicated that, according to a UN report, 60,000 women lost their husbands, and the number of families headed by women at the level of Yemen reached 417,000 families.

Shocking Numbers of Victims in Yemen Due to Aggression, Blockade

Regarding the violations of the Saudi-Emirati occupation in the occupied territories,EIntisaf showed that the number of violations committed by the forces of aggression on the West Coast amounted to 695 violations, including 132 crimes of rape and 56 crimes of kidnapping. The violations in the southern governorates, and Aden in particular, amounted to 443 crimes of rape, according to the reports.

Regarding learning conditions, the report indicated that there are approximately 6.1 million male and female students suffering from the collapse of the education system, and nearly 3,500 schools are either destroyed or damaged. There are two million and 400 thousand children out of school, while the number of children who face a dropout from education may rise to six million.

It pointed out that the aggression caused the denial of women’s right to education as a result of targeting educational facilities, the economic blockade, and non-payment of salaries, which led to the inability of some families to provide basic education needs such as breakfast. 31 percent of Yemeni girls are now out of school.

As for the disabled, the organization documented an increase in the number of people with disabilities from three million before the aggression to 4.5 million people now. It indicated that about six thousand civilians have been disabled as a result of armed hostilities since the start of the aggression, including approximately five thousand and 559 children. The actual number is expected to be much higher.

The report indicated that the phenomenon of child labor expanded during the years of aggression, at a rate that may exceed four times what it was previously. It stressed that 1.4 million working children are deprived of their most basic rights. About 34.3 percent of working children between the ages of five and 17 work in Yemen.

Deteriorating Health Situation, Millions of Victims Due to Aggression, Blockade

On the health side, the Entisaf organization confirmed that public and private hospitals throughout the Republic are threatened with closure during the next few days due to the blockade and the aggression’s detention of oil ships.

It added that more than 80 newborns die every day because of the internationally prohibited weapons used. It pointed out that this is one of the reasons for the high number of preterm infants, as 39 percent of newborns born each year are preterm, with one million and 120 thousand newborns born per year.

It pointed out that “nearly 70 percent of obstetric medicines are not available in Yemen due to the blockade and the aggression’s prevention of their entry.”

The organization pointed out that more than 5,000 patients with kidney failure are at risk of death, while the number of people with cancer has reached 35,000, including more than 1,000 children.

It held the US-Saudi aggression responsible for all crimes and violations against civilians, especially women and children, over a period of eight years.

It also called on the free people of the world to take effective and positive action to stop the aggression, protect civilians, to form an independent international commission to investigate all crimes committed against the Yemeni people, and to hold accountable all those found involved in them.