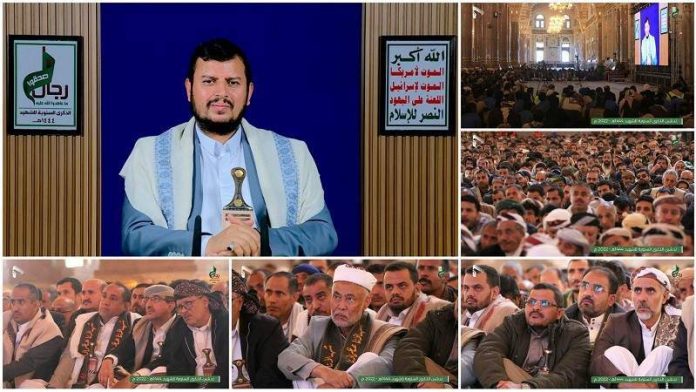 Sayyed Abdulmalik Al-Houthi, affirmed that “we are ready to confront the enemies if they return to escalation,” warning that “we will respond with a stronger hit than ever.”

Sayyed Abdulmalik explained that the Americans, Israelis and the British and their regional tools want Yemen to be occupied, expressing enemies want to set up their bases anywhere in Yemen, to control its facilities, and to make the political situation serve their interest.

He also stressed that the enemies want to take away whatever is benefiting the people including their oil and gas, and that our people are only allowed to get crumbs to keep their living conditions in distress, while hundreds of billions of dollars go to American and European companies.

“Hostile policies of US-Saudi aggression coalition harm all citizens, even in the occupied areas. They prevent our people from getting fuel but they detain ships until the price is too high,” he said.

Sayyed Abdulmalik pointed out that “we cannot accept Yemen to be occupied. Americans, British, Emiratis and Saudis can come to establish their bases wherever they want. We will not accept that occupiers control political situation in Yemen, loot its wealth.”

“We are not like Saudi, Emirati and Al Khalifa in Bahrain, we do not receive directives from America, our freedom is something that does not enter into a bargaining auction,” he said.

Sayyed Abdulmalik stresses that the Americans – who are the root of the problem – benefit from war, only wanted peace that means  surrender for us and they at this stage are trying to put us between unfair choices.

“We are keen to achieve a just and honorable peace, and we are in the position of defending our country and ready to confront enemies if they return to escalation,” he said.

The Saudi kingdom and its allies, most notably the United Arab Emirates, have been waging a war against Yemen since March 2015, trying, in vain, to reinstall the exiled Saudi-friendly regime of Abd Rabbuh Mansur Hadi.

The military campaign, which has been enjoying unstinting arms, logistical, and political support from the United States, has killed hundreds of thousands of people and turned the entire Yemen into the scene of the world’s worst humanitarian crisis.

In recent months, Yemeni officials have issued stern warnings to Israel about its role in supporting the war on Yemen.

In a warning to the Saudi-led coalition and the countries supporting it, Yemen’s defense minister said that the country’s Armed Forces are capable of hitting targets far beyond Saudi Arabia and the UAE.

“We will never hesitate to bombard very sensitive and important facilities, and we will include them in the list of our future targets,” Major General Mohammad Al-Atifi said.

“The designated targets will not be constrained to areas within the borders of Saudi Arabia and the UAE; and could be situated in regions much beyond these two countries,” he added.