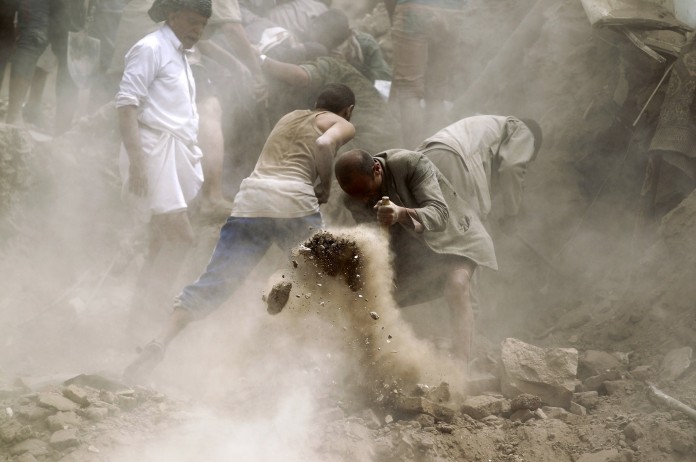 Libya is often mentioned as the worst foreign policy disaster of the Obama Administration.  There’s a good case for that, as Libya went from having the highest standard of living in Africa, to a disaster essentially ran by Al Qaeda militants.  However, there is a far worse disaster that the US government has helped to facilitate in Yemen, and they’ve refused to admit playing a part in it.

For more than 500 days the US government has participated in a shameful war of aggression against one of the poorest countries on the planet.  Since March 2015, Saudi Arabian military forces have conducted operations against Houthi and other anti Saudi forces in Yemen.  These Saudi forces have been repeatedly exposed deliberately targeting civilians, frequently using illegal cluster munitions.

The US meanwhile has supplied the Saudis with weapons, intelligence, and logistical support.  In addition, US UN ambassador and so called “humanitarian” Samatha Powers has helped the Saudis to block efforts for an impartial analysis of the Saudi military’s crimes.

Most recently, the US government has announced a 1.5 billion dollar weapons deal with Saudi Arabia including: 130 Abrams tanks, 20 armored recovery vehicles, and other vehicles and equipment.  This deal was approved at the very same time Saudi Arabia announced it was resuming active combat operations in Yemen.  The US Central Command has also performed 1,144 refueling sorties for the Saudi coalition.

The war itself has officially killed 10,000 people, and led to 2.8 million refugees according to the UN Refugee Agency.  The death may actually be far higher than reported.  According to The World Food Program, 14.4 million people in Yemen are considered to be ” food insecure.”  Half of those people are currently in need of immediate food assistance.

“At least 370,000 children are suffering from severe acute malnutrition,” said Mohammed  al-Asaadi a spokesman for the UN children’s agency in Yemen.  “We’re talking about a 50 percent increase compared to the number we had earlier this year.”

Much of this is due to a massive naval blockade choking off humanitarian supplies, as well as a bank freeze in a country that relies almost exclusively on imports to survive.  This has lead to a massive increase in the price of food.

Due to the extreme poverty in Yemen, many are unable to afford food and medicine, and have to hope their neighbors have some that they can borrow.  “I can’t afford milk or medicine for the children.  If one of them gets sick, I can’t take him to the doctor, I borrow fever and cough medicines from the neighbors,” said Taqwa Mohammed, resident of Hodeidah city in western Yemen.

The situation is so bad, that some people have to rely on a single piece of bread to sustain them throughout the day, and sometimes they simply don’t eat.  It was a recipe for disaster, and obvious warning signs were completely ignored.  This is also a very real example of what can potentially happen when government interferes with trade: people die.  Yes, war is an extreme example, but that is the furthest a government can go to a thing it constantly tries to limit.

Mention Yemen in Washington or on the Presidential campaign trail, and you will be met with a deafening silence, or cheer leading for the Saudis.  Democratic Vice Presidential nominee Tim Kaine has “urged” the Obama administration to back the Saudis.

The Republican side has chosen the silent route instead.  In fact, the only politicians who have spoken out against the war are Senators Rand Paul and Chris Murphy.  The media has largely failed in reporting the conflict, and the crisis it has caused, despite it being one of, if not the worst human crisis on the planet, instead focusing on “sexier” conflicts in the Middle East, such as the one in Syria.  Of course, there are exceptions, Daniel Larison at The American Conservative has produced some of the best work exposing Washington and Riyadh’s crimes in Yemen.  The foreign press in addition has done a much better job reporting on the conflict, than the US media has.

Of course, ignoring war crimes, and potential genocide makes perfect sense in the eyes of the US government; it’s not like they’ve gone down that road before…  Some of the people in Yemen decided they didn’t like a US/Saudi puppet ruling them, who was the only choice offered in a sham of an election.  So, they decided to do something about it, overthrowing President Abd Rabbuh Mansur Hadi.  For their crimes, the legions were sent to punish them, and bring them back in line, civilians be damned.

The US government, despite all of its rhetoric, does not care about the lives of other human beings.  Its actions speak louder than any words can.