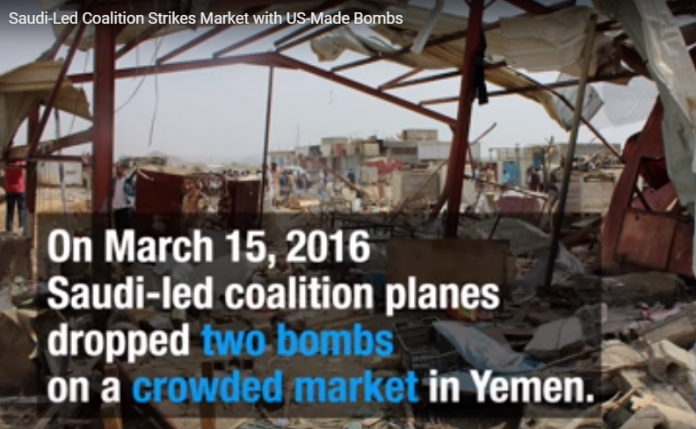 Human Rights Watch documented the deadly Yemen marketplace airstrike by the Saudi-led coalition and found that U.S.-made bombs were used.

April 8th, HRW said that the two strikes, on a crowded market in the village of Mastaba caused indiscriminate or foreseeably disproportionate loss of civilian life, in violation of the laws of war, “such unlawful attacks when carried out deliberately or recklessly are war crimes”.

Human Rights Watch conducted on-site investigations on March 28, and found remnants at the market of a GBU-31 satellite-guided bomb, which consists of a US-supplied MK-84 2,000-pound bomb mated with a JDAM satellite guidance kit, also US-supplied.

According to the HRW Aa team of journalists from ITV, a British news channel, visited the site on March 26, and found remnants of an MK-84 bomb paired with a Paveway laser guidance kit. Human Rights Watch reviewed the journalists’ photographs and footage of these fragments.

“One of the deadliest strikes against civilians in Yemen’s year-long war involved US-supplied weapons, illustrating tragically why countries should stop selling arms to Saudi Arabia,” said Priyanka Motaparthy, emergencies researcher at Human Rights Watch. “The US and other coalition allies should send a clear message to Saudi Arabia that they want no part in unlawful killings of civilians.”

Human Rights Watch has called on the United States, United Kingdom, France, and other countries to suspend all weapon sales to Saudi Arabia until it curtails its unlawful airstrikes in Yemen, credibly investigates alleged violations, and holds those responsible to account. Selling weapons to Saudi Arabia may make these countries complicit in violations, Human Rights Watch said.

Since March 26, 2015, a coalition of nine Arab countries has conducted military operations on Yemen.

On February 25, 2016, the European parliament passed a resolution calling on the European Union’s high representative for foreign affairs and security policy, Federica Mogherini, “to launch an initiative aimed at imposing an EU arms embargo against Saudi Arabia.” On March 15, the Dutch parliament voted to impose the embargo and ban all arms exports to Saudi Arabia.