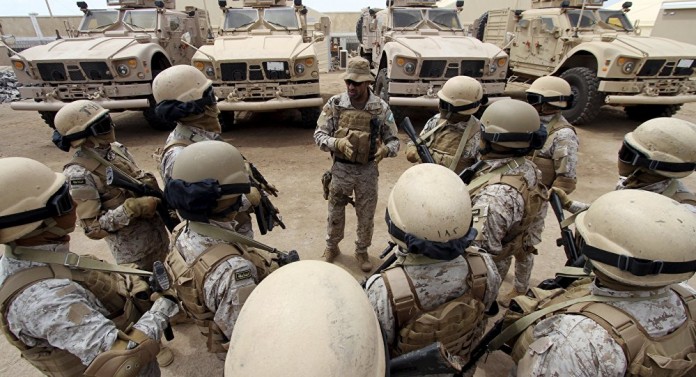 The American political analyst and researcher Phil Butler said that the US-backed Saudi Arabian war against Yemen is neither about the longstanding sectarian strife between Sunnis and Shiites, nor about the much-discussed military campaign aimed against al-Qaeda in the region. the truth of the matter is the country is sitting on substantial oil and gas reserves, which Saudi Arabia and its allies want to control.

“Given the nature of the country’s [Saudi Arabia’s] oil reserves, and almost unlimited production for decades, it’s possible the Saudis could simply be running out of gas,” the American analyst stressed. To illustrate his point, the analyst refers to the 2013 Offshore-magazine .com report entitled ‘Saudi Arabia dramatically increases rig count, accelerates offshore development.’

The analyst added that if Riyadh was not planning to increase its production capacity, why did it rush to install new rigs, especially offshore ones, which are 7 times more costly to run, Butler asks. The analyst believed that Saudi Arabia has been lying for decades about its actual oil capacity. To stay on top, Riyadh has to maintain control over oil reserves beyond its borders, particularly in Yemen.

The Western establishment is assisting Saudi Arabia, and with “reason”: in November 2005 the Republic of Yemen expropriated its oil basins — the Marib Al-Jawf Block — from Hunt Oil Company and ExxonMobil affiliates. The analyst points to the fact that the Obama administration has long been aware of Yemen’s substantial gas capacity. He quotes Ambassador Stephen A. Seche’s 2008 secret cable, published by Wikileaks, which reads “that the governorates of Shabwa, Marib and al-Jawf have high potential for significant gas deposits.”

Phil Butler ends his report by saying “so the picture puzzle of Yemen chaos should be complete for you now.”