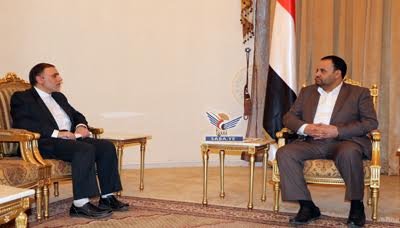 May 16th, the head of the supreme political council Saleh al-Sammad met on Monday the Charge d’Affaires of the Iranian Embassy in Sana’a Mohamed Farhat.

During the meeting, they discussed the regional and international developments and the position of the two countries, and the important role that could be played by Iran in supporting the Yemeni people in the current ordeal of the Country

They also reviewed the international conspiracy against Yemen, especially in the economic aspect and their steadfastness in confronting the forces of arrogance.