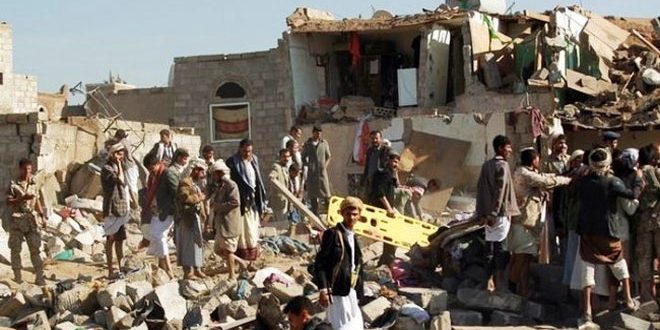 The Saudi-American aggression continued its criminal raids on a number of the Yemeni provinces, killing and injuring dozens of citizens and destroying their homes and properties.

A military source told SABA that the Saudi-American aggression warplanes carried out a raid on Ghamr in Sa’da province, killing two men, a woman and a girl and injuring two others.

The source confirmed that two citizens were killed  in a raid targeted their car in the area of ​​Bani Sayah of Razih  district , and wounded a citizen in a raid targeting a water digger machine in al  ​​Ammar area in Sa’ada province.

Moreover, in Sa’ada province, the aggression warplanes launched three raids on Shada district, four raids on Baqim district and three raids on al–Zahir District, and nine raids on al-Atfeen area and a raid on Kitaf district, while Razih district border was under the bombardment of the Saudi enemy shelling.

The source indicated that a number of houses had been destroyed as a result of six raids s on the village of al-Zaidi in Sirwah district of Marib province.

The same source said the hostile flight launched a raid on Jabal MBC in Jizan and a raid on al-Shurfa’a site in Najran.