Home Articles Congress, Not Trump, Has the Authority Over War 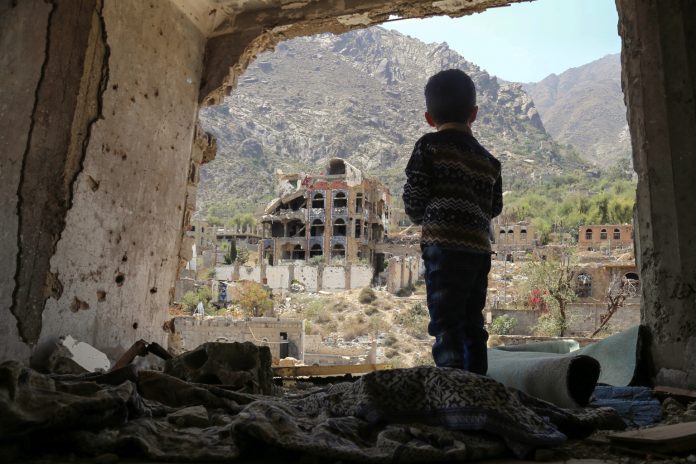 America’s representatives can, and should, end the country’s participation in the horrific onslaught on Yemen.

On March 20, by a vote of 55-44, the U.S. Senate tabled a resolution that I introduced along with two of my colleagues, Republican Mike Lee of Utah and Democrat Chris Murphy of Connecticut, calling on the president to withdraw U.S. participation in the war in Yemen.

We offered this resolution for two reasons. First, the Saudi-led war in Yemen has led to one of the worst humanitarian crises in modern history. Second, the time is long overdue for Congress to reassert its constitutional authority in matters of war. Article I of the U.S. Constitution states clearly that the people’s representatives in Congress, not a single person residing in the White House, shall have the power to declare war.

Though a majority of our Senate colleagues voted to table our resolution — that is, they chose to avoid taking a vote on the issues it raised — I am more convinced than ever of the need to go forward aggressively on this matter. We must never forget that the two most significant foreign-policy disasters in the modern history of the United States, the war in Iraq and the war in Vietnam, occurred when Congress sat back and allowed two administrations, one Republican and one Democrat, to lie to the American people as they led us into conflicts with horrific consequences. We must never allow that to happen again.

On March 20, 2003, the war in Iraq, which I strongly opposed, began and the bombs started falling on Baghdad. Today, it is widely acknowledged that the war in Iraq was a blunder of enormous magnitude, and that our entry into that war was based on a series of falsehoods. Despite what the Bush administration said, Iraq had no role in the 9/11 attacks, and it did not possess weapons of mass destruction that threatened the United States.

As we now know, that war created a cascade of instability around the region that we are dealing with today in Syria and elsewhere, and will be for many years to come. Indeed, had it not been for the Iraq War, the Islamic State would almost certainly not exist.

The war deepened hostilities between Sunni and Shiite communities in Iraq and elsewhere. It exacerbated a regional struggle for power between Saudi Arabia and Iran and their proxies in places like Syria, Lebanon, and Yemen, and it undermined American diplomatic efforts to resolve the Israeli-Palestinian conflict.

That war was created by a Republican administration. Now, let me tell you about a Democratic administration, and an earlier conflict that began on similarly false pretenses. In 1964, President Lyndon B. Johnson cited an attack on a U.S. ship in the Gulf of Tonkin as a pretext for escalating the U.S. intervention in Vietnam.

We now know from declassified recordings that Johnson himself doubted that the USS Maddoxhad come under fire on Aug. 4, 1964, but still used that alleged attack to push for the Gulf of Tonkin Resolution, authorizing him to escalate United States military involvement in Vietnam.

The truth about Yemen is that, by providing intelligence and the aerial refueling of Saudi combat planes, U.S. forces are engaged in hostilities unauthorized by Congress. This war has resulted in a massive humanitarian crisis where some 10,000 civilians have been killed, 40,000 more have been wounded, and more than 3 million have been displaced. In November of last year, the United Nations emergency relief coordinator said that Yemen was on the brink of “the largest famine the world has seen for many decades.” Fifteen million people lack access to clean water and sanitation because water treatment plants have been destroyed. More than 20 million people in Yemen, over two thirds of the population, need some kind of humanitarian support, with nearly 10 million in acute need of assistance. More than 1 million suspected cholera cases have been reported, representing potentially the worst cholera outbreak in world history.

The Yemen war has also undermined U.S. efforts to stop terrorism. In 2016, Reuters reported that the war “has helped al Qaeda in the Arabian Peninsula (AQAP)” — one of al Qaeda’s most dangerous branches — “to become stronger than at any time since it first emerged almost 20 years ago.” A 2016 U.S. State Department report likewise found that the conflict had helped both al Qaeda and the Islamic State to “deepen their inroads across much of the country.”