Home Articles What is the world waiting for to stop this war? 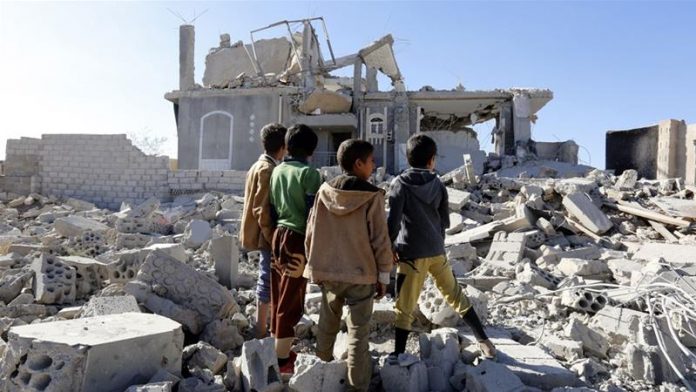 The political settlement through a comprehensive dialogue between Yemenis is still the only way to compromise the disputes and get a solution to this conflict.

The facts on the ground suppose more than ever of the need to go forward aggressively on this matter. War can’t solve the problem, and Saudi-led coalition must know that and know Yemenis will not give up their rights to determine their fate and live the true meaning of life.

As a matter of fact, Saudi and its allies committed a shameful action when launched this war against the Middle East’s poorest country, Yemen.

Today, activists all over the world condemn this war which just created the largest humanitarian crisis in the world. The Saudi-led coalition war, backed by the United States and the United Kingdom has not given peace to Yemeni people vise versa it caused a humanitarian tragedy, it has devastated the already-weak infrastructure, targeted everything and everywhere without even discriminate between civilian and military places in flagrant violation of the principles of international humanitarian law that prohibits indiscriminate attacks and requires civilians to be protected in times of war and conflict.

Four years of killing, devastation and strangling blockade, nearly four years of bombardment have resulted in massive civilian casualties, killed, injured and displaced tens of thousands of people majority of them are civilians.

Four years of restrictions prevented flow of food, flow of products, created “The world’s largest food security emergency” according to UN. left millions on the brink of starvation, plunged the economy into crisis, and led to an epidemic cholera and outbreaks of diphtheria and to one of the worst humanitarian crises in modern history.

Four years of suffering of Yemeni people from difficult living condition which worsens day in and day out; And under such current situation many families are struggling to make ends meet.

In light all of that the first step must now be to stop the bloodshed in the country. The situation in Yemen is very serious in the full sense of the word and if the war continues, it will mean the situation can get worse, will mean more pain for the people of Yemen.

Today, we may be within walking distance of a new round of negotiations or deliberation, and there, we must not forget that Yemen can not wait any longer to get ways to build peace in Yemen, arrive at a compromise and reach a lasting and comprehensive political settlement.

For its part, the UN which has not yet taken any effective measures to halt this humanitarian tragedy must bear its responsibility likewise the international community has a moral obligation to stop this horrific war.

The bottom line is this tragic war in Yemen has to stop by all means for the sake of people, it has to stop in one way or another if we want this unprecedented humanitarian crisis to end.