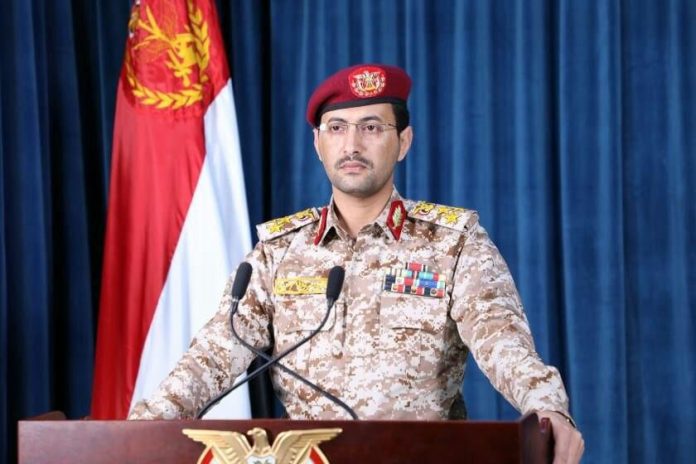 The Armed Forces Spokesman, Brigadier General Yahya Sare’e, revealed on Sunday the statistics of the military operations carried out by  the Armed Forces during the six years of steadfastness.

During a press briefing, Brigadier General Yahya Sare’e said that over the past six years the heroes of the Army and Popular Committees have carried 12,366 military operations, including 6,192 offensive attacks,

More than 6,192 offensive attacks, including 167 attacks carried out by the Yemeni forces in the past two months, he added.

Brigadier General Yahya Sare’e indicated that the sniper units carried out over 54,025 sniping operations on various fronts, including 2,502 sniping shoots done in the past two months. These operations left thousands of mercenaries, including Sudanese nationals, as well as soldiers and officers of the Saudi enemy army dead and wounded.

The military Engineering Unit carried out more than 10,560 operations, targeting fortifications, vehicles, and gatherings, he stated.

He noted that the Anti-armor units carried out over 6,385 operations targeting enemy armored vehicles, troop carriers, bulldozers and others military gear.

The artillery unit carried out more than 59,852 operations, including backing, targeting and repelling infiltration attempts carried out by Saudi-led mercenaries, including 638 joint operations with the air forces.

Over 14527 vehicles, armored vehicles, tanks, troop carriers, bulldozers and various weapons of the enemy were destroyed or damaged since March 26, 2015, he added.

The Air Defense Forces carried out over 1,534 operations that varied between shooting down aircraft, repelling and forcing them to leave airspaces of Yemen, the military spokesman  said.

He explained that the air defence forces succeeded in shooting down over 454 aircraft of coalition, including warplane, helicopter, reconnaissance and spy aircraft.

The missile force carried out 1,348 operations, in which it fired 1,348 ballistic missile. About 499 ballistic missiles targeted military and vital installations of Saudi enemy and others belonging to Emirati enemy, Brigadier General Yahya Sare’e said.

A total of 849 ballistic missiles hit gatherings, installations, headquarters, and centers of the enemy and its mercenaries inside Yemeni territory.

The army drones carried out over 12,623 operations, including 1150 offensive operations, army spokesman said, adding that 572 attacks hit targets of enemy outside Yemen, and 578 operations struck targets inside Yemen.

The number of reconnaissance operations amounted to more than 11,473, he added.

Regarding the Saudi-led coalition’s casualties, he noted that until March 23, 2020, the human losses of the Emirati enemy reached more than 1,240 dead and wounded, while the human losses among the Sudanese mercenaries amounted to more than 4,416 dead and 4,218 wounded.

The human losses among the local mercenaries, traitors and agents exceeded 226,615 dead or wounded, he added.

Sare’e confirmed that the enemy admitted recently that 18,000 mercenaries were killed and 50,000 wounded in 2020 only on Marib fronts.

In the press conference, he also said that there are new missiles and different generations of drones not yet disclosed.

The military spokesman warned that the army forces are determined to take major military steps surprising the enemy to liberate the country and achieve independence.