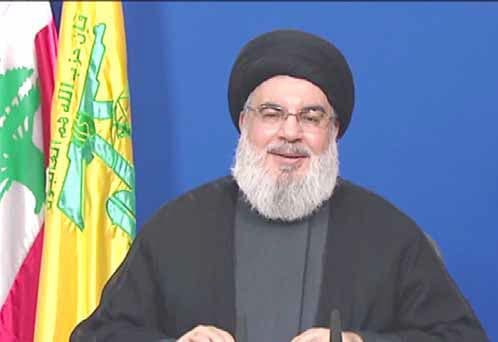 The speech was to tackle the latest political developments in Lebanon as well as the governmental deadlock and the exacerbating crisis in Lebanon, Al-Manar reported.

He addressed Iran’s nuclear talks in Vienna saying: “Vienna talks exclusively tackle Iran’s nuclear deal; only the US is trying to involve Lebanon in a certain swap.”

“Recent Iranian-Saudi talks in Baghdad did not tackle the Lebanese issues,” he noted.

“The US move of seizing dozens of websites exposes Washington’s false claims about freedom,” he said, “US statements about supporting the Lebanese Army to face Hezbollah aims at stirring sedition among the Lebanese.”

“Hezbollah has always called for reinforcing the Lebanese army which guarantees Lebanon’s security, integrity, and unity,” he added, “Hezbollah is not concerned about enhancing the military capabilities of the Lebanese Army; the US prevents that for sake of ‘Israeli [regime]’.”

“Some Lebanese parties unfairly blame Hezbollah for the governmental deadlock in Lebanon,” he added.

Nasrallah added that the 8-8-8 formula has never been adopted as the basis of the new government creation, Lebanese Shia Muslims are not seeking tripartite power-sharing.

“Hezbollah insists on preserving the share of President Michel Aoun and Free Patriotic Movement in the new government.”

“Hezbollah has finished all the logistical preparations to import fuel from Iran; when the state fails to tackle the shortage crisis, the final decision will be taken.”

“All Lebanese parties must assume responsibility for canceling the government’s subsidies,” he said.

He thanked the Iraqi government for approving the fuel aid to Lebanon despite the hard economic conditions.