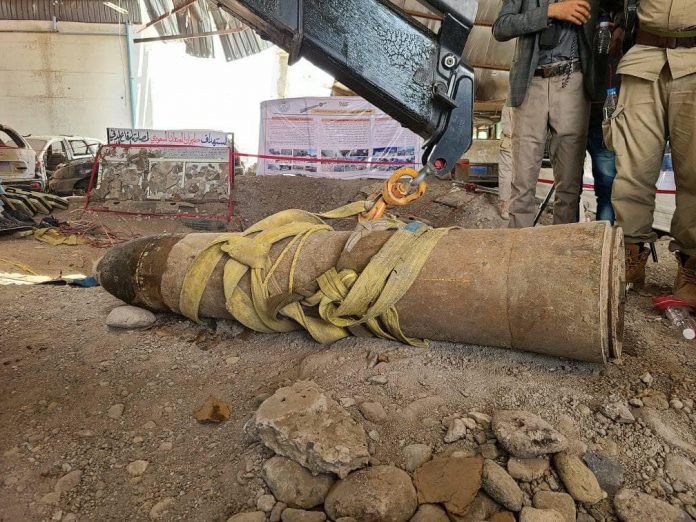 The Yemen Executive Center for Mine Action (YEMAC) held a press conference on Sunday at the scene where the Civil Defence unit in Sana’a was targeted by the US-Saudi aggression forces with a GBU-24 laser-guided bomb on 19 September 2015.

During the conference, the Center revealed the types of deadly American bombs used by the US-Saudi aggression against civilian objects in Yemen.

The Director of the Executive Center for Mine Action, Brigadier General Ali Safrah, explained during the conference that the technical specifications of the American bomb are used for general purposes and are of the Paveway category, manufactured in the US and entered into service in 1983.

Safrah indicated that the civilian objects that were targeted by the US GBU-24 bomb are the Wa’lan Agricultural Complex in Bilad al-Rus, a civilian house in Al-Sabeen district and houses in Sawan and Dhapwa areas. The bomb also targeted the Civil Defence Authority building, the Al-Aqel Industries Complex and Amran Cement Factory, he added.

The Director of the Executive Center for Mine Action confirmed that Yemen was also targeted with GBU39/31 SDB munitions.

He explained that the US-made JDAM bombs are satellite-guided and inertial navigation system bombs, which carry a warhead of 945 kilograms.

He indicated that among the civilian objects that were targeted with JDAM bombs, there were many schools in the governorates of Hodeidah, Bayda, wedding in Sanban, Mastaba Market and the Equestrian Club. These bombs also targeted Al-Hunud residential neighborhood in Hodeidah, the neighborhoods of Noqum area and the Yemen International Food Industries Company in the Salif port.

Ali Safrah pointed out that the American bombs are exceptionally dangerous, leading to a wide spread of cancerous diseases, deformities and fatal congenital cancerous births and affect the immune and nervous system. It also leads to abnormalities in the uterus due to their chemically and radiologically toxic elements.

The director noted that the effects of these weapons appear on humans, plants and animals in the medium and long term in the form of genetic defects, birth defects and cancerous diseases. It also destroys and harms the environment, pollutes the air, poisons ground water and destroys the normal life in the affected areas, sometimes for period estimated to be millions of years.