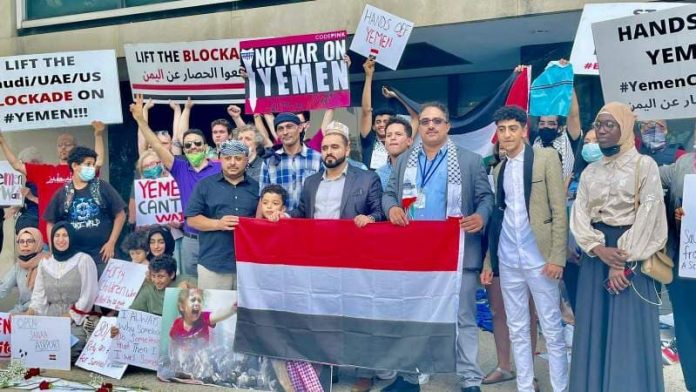 Yemeni and other Arab and international community organisations have on Tuesday held a protest rally denouncing the crimes committed by the Saudi-led  aggression coalition against the Yemeni people.

The rally, which was held in in front of the United Nations building in New York City, came to mark the anniversary of the Dahyan student bus massacre that was committed by the US-backed Saudi aggression’s airstrikes in 2018, killing 40 children in Saada province.

The participants called the rally of “For the grievances of the children of Yemen”, and said they considered the Dahyan student bus crime in Saada and other massacres by the aggression coalition in various Yemeni province as contradicting international humanitarian norms, charters and laws that criminalise targeting civilians.

They denounced the international silence towards the crimes of aggression against civilians and even children amongst the Yemeni people.

The protesters condemned the continued US support for the Saudi regime and its provision of weapons that kill Yemeni children.

The rally was attended by a number of activists from American organisations against the Saudi-led war on Yemen, with the participation of members of an international campaign team to end the siege on Sana’a International Airport.