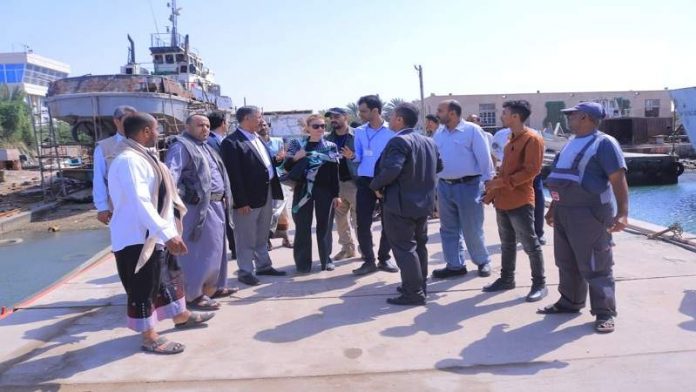 Head of the National Team for Redeployment (NTR) Major General Ali Al-Mushki on Sunday called on the UN Mission to Support Hodeidah Agreement (UNMHA) to take a clear position on the Saudi-led aggression coalition’s threat to target Hodeidah port.

During his meeting with Deputy Head of UNMHA Daniela Kroslak in Hodeidah port, Maj. Gen. Al-Mushki reviewed the provocative actions of the aggression coalition forces and their bombing of residential areas, and the killing of women and children.

Al-Mushki expressed his regret for the inaccuracies contained in the statements of the “coalition’s spokesman” about the port, that pave the way for new attacks on the port, which is the only and main artery for the entry of food, medicine and humanitarian aid for more than 70 percent of the Yemeni people.

He called on the UN mission to play its humanitarian role and take a firm decision to prevent maritime piracy on fuel and food ships, which the aggression coalition’s countries are using as a means of pressure in their aggressive war against the Yemeni people.