Home Reports Foreign Minister: It is ridiculous that one of aggressors adopted resolutions against... 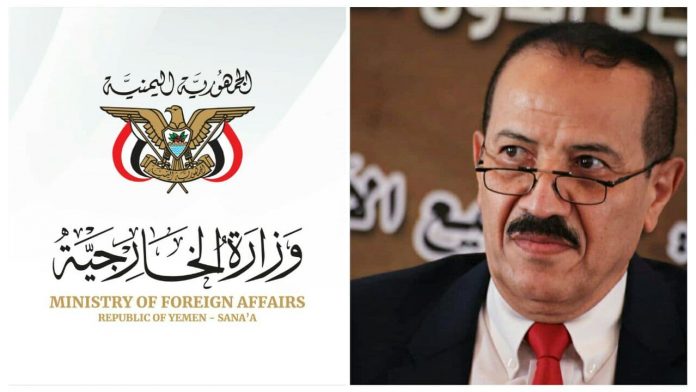 Yemen’s Minister of Foreign Affairs Hisham Sharaf has condemned the provocative style and new language contained in a recent vote by the United Nations Security Council (UNSC) to expand a targeted UN arms embargo from targeting individual leaders of Ansarullah to the entire group.

“Instead of the Security Council’s decision being procedural, as it was in previous years, thanks to the temporary membership in the Security Council of one of the aggressor countries, it turned into a resolution that serves the interests of the countries of the US-Saudi-Emirati aggression and under the Council cover,” the Minister of Foreign Affairs said in a statement to Saba News Agency.

Sharaf noted that the UN Security Council has departed from its role in maintaining international peace and security and moved to serve those whose suspicious and criminal role the whole world knows in destroying Yemen and causing the suffering of millions of Yemenis during the past seven years.

“It is shameful and ridiculous that one of the aggressors against Yemen has adopted the issuing of new sanctions on Yemen,” he added.

Sharaf cited the crime of the Attan neighbourhood, in which internationally prohibited weapons were used, and the targeting of a bus for students in the Dahyan area, among other crimes.

“The objectives of the Sana’a defence forces are the airports from which warplanes fly to bomb Yemeni cities, as well as the airfields and vital installations that finance military operations, while the international community knows the coalition’s targets are located among villages, cities, residential communities, installations and infrastructure facilities in Yemen.”

The Minister of Foreign Affairs said he was surprised by the double standards in Security Council Resolution No. 2624 in describing self-defence operations as ” terrorist attacks.”

Minister Sharaf renewed the call of the UN Security Council to review the role for which it was established: maintaining global peace and security, and not for the purpose of representing the interests of the powerful and the rich among countries.