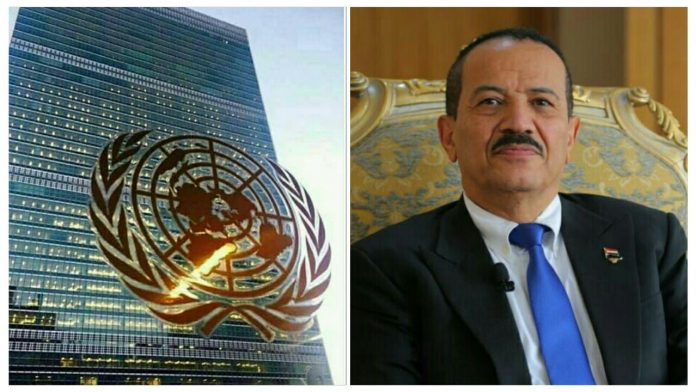 Foreign Minister in the national salvation government, Hisham Sharaf, on Saturday stressed that “the attempts of the aggression countries to dilute the current truce, evade the implementation of its requirements and keep the country in a state of no war and no peace, is totally rejected and cannot be accepted.”

This came in a written letter he sent to the heads of delegations and foreign ministers of the countries participating in the 77th session of the United Nations General Assembly.

In his letter, the Foreign Minister indicated that “for the eighth year in a row, world leaders have gathered at the United Nations to discuss many issues of concern to humanity, and the Yemeni people are still suffering from brutal military aggression and a comprehensive siege that has created the worst man-made humanitarian catastrophe since the founding of the United Nations.”

He explained that what the Republic of Yemen is suffering from is not an internal conflict or civil war, as the Saudi-led coalition countries are trying to portray to the world. “Rather, it is a military aggression and a land, sea and air blockade that contravenes all international covenants and the Charter of the United Nations.”

The Foreign Minister stressed that “the aggression countries are practicing a war of extermination and systematic destruction of everything in Yemen, and all this is under a false pretext, which is what it calls the restoration of constitutional legitimacy.”

The coalition countries are also engaging in economic war and pursuing a systematic policy of starvation and destruction against the Yemeni people, by cutting the salaries of state employees, working to destroy the national currency, and continuing from time to time to prevent the entry of ships loaded with oil derivatives and domestic gas, and to put many obstacles in the way of restoring air traffic to and from Sanaa International Airport in front of civilian commercial flights.

The foreign minister addressed world leaders, saying: “The Saudi-Emirati aggression against Yemen is not the result of its moment, and that it has hidden goals and agendas that it is working to implement, taking advantage of the greed of Yemeni mercenaries to implement and pass their plans.”

He stated that one of those goals is “to find a foothold inside the Yemeni lands and islands for foreign military forces with the aim of occupying many strategic sites such as Socotra Island, Bab al-Mandab Strait and Mahrah province.”

Sharaf touched on the efforts of the aggression countries to stir up regional strife and fuel permanent conflicts among Yemeni society in an effort to dismantle the country popularly and geographically, in addition to supporting, arming and financing terrorist organizations such as al-Qaeda and ISIS, and integrating some of these elements into the security and military formations that it established for use in threatening the country’s unity and international peace and security in the region. Bab al-Mandab and the southern Red Sea.

The Foreign Minister affirmed that the political leadership in Sanaa, represented by the Supreme Political Council and the National Salvation Government, supports all good offices to consolidate the current truce in order to reach a peaceful political settlement and sustainable peace, emphasizing the importance of adhering to the requirements of the armistice.

Concluding his letter, Sharaf also affirmed Sana’a government’s clear and unambiguous position in its desire to reach a peaceful political settlement and sustainable peace, and to establish good relations with neighboring countries based on the principle of non-interference in internal affairs.