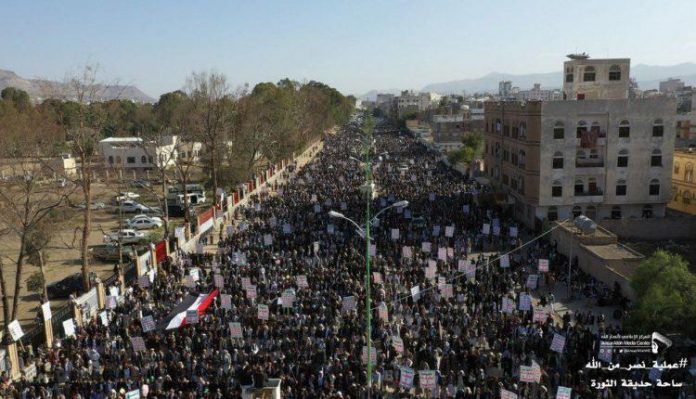 Tens of thousands of Yemenis have gathered to gather at the western square of Al-Thawra Park, in front of the gate of Sana’a University and the Financial Bridge,celebrating Operation Victory from God that took place in Najran.

The participants chanted slogans against US hegemony and raised pictures of the martyrs of the Operation.

The mass rallies praised the great achievements of the Yemeni Army and Popular Committees in all frontlines, including Operation Victory from God, which caused panic and terror among the enemies.

They confirmed that the operation revealed the strength of the Yemeni fighters, who are facing the most powerful force in the world armed only with their Kalashnikov rifles.

The demonstrators congratulated the Leader of the Revolution, Sayyid Abdul-Malik al-Houthi, the political leadership of the Supreme Political Council, and all the honourable people in Yemen.

The march’s statement stressed the importance of these victories, which are achieved on various fronts, especially the border frontlines against the Saudi army and its mercenaries.

At the same time, it warned of the consequences of a possible Saudi failure to respond to the peace initiative.

They reiterated the call for those Yemenis who have been deceived into supporting the aggression forces, to return to the homeland and to stand united in the face of aggression.