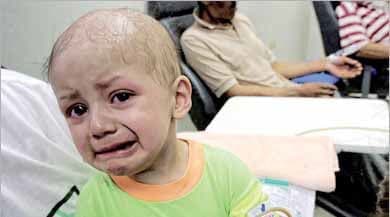 Yemen celebrated World Cancer Day on February 4th amid a frightening increase in cancer patients due to the continued aggression and its use of internationally banned weapons against the Yemeni people.

The celebration of World Cancer Day came amid the suffering of cancer patients in Yemen, which is exacerbated by the continued siege and the prevention of entry of life-saving medicines, medical devices, and treatment supplies for cancerous tumors.

The aggression coalition’s methods have varied in its criminal war against Yemen and its people for six years, using warplanes for spreading internationally prohibited weapons, epidemics, and diseases.

A report issued by the Ministry of Public Health and Population indicated the number of cancer patients reached 71,000 since the beginning of the aggression.

The report indicated there are 9,000 cases of cancer added annually a rate of 15% among children, pointing that around 12,000 cancer patients have been died due to cancer.

Minister of Public Health and Population Dr. Taha al-Mutawakel confirmed the increase in cases of leukemia patients among children from 300 to 700 cases as a result of the aggression’s use of internationally prohibited weapons in Attan and Noqm areas in the capital Sana’a.

The report noted thousands of children also affected the rest of the provinces, explaining that more than 300 children with leukemia need to travel abroad for urgent treatment.

The Health Minister held the aggression countries responsible for the deaths of affected children as a result of preventing the entry of their medicines, pointing out the cure rate is high for leukemia, but banning medicines and preventing their entry leads to the death of many children.

Al-Mutawakel also held the countries of aggression and the United Nations responsible for the death of cancer patients in general, as a result of the continued siege and the closure of Sana’a International Airport.

He explained the continued closure of the airport and the prevention of the arrival of the radiation device for treating cancerous tumors threatens the lives of more than 40,000 patients with various cancerous tumors, pointing out that 50% of oncology patients died as a result of the lack of medicines because of the blockade.

Dr. Ali al-Mansouri, the deputy director of the National Oncology Center, said the number of registered cancer patients since its opening to date has reached 72,000.

He explained that about 40,000 patients visit the center annually to receive diagnostic and therapeutic services.

Al-Mansoori stressed that with the continuation of the blockade, the closure of the airport, and the piracy of oil derivatives ships by the aggression, cancer patients are still paying their lives for all this arrogance and criminality in light of suspicious and shameful Arab and international silence.

According to the report of the Health Ministry, strenuous efforts have been made to alleviate the suffering of cancer patients by providing medicines, devices, and equipment.

The Cancer Control Fund implemented many activities and projects in order to alleviate the suffering of cancer patients.

Dr. Abdul Salam al-Madani, the Chairman of the Board at the center, explained that three units for treating tumors were equipped, furnished, and opened in Sa’ada, Amran, and Hajjah provinces.

Dr. al-Madani said it has been implemented and extended the children’s leukemia unit at Kuwait University Hospital in the capital Sana’a, including providing necessary medicines.

He pointed to the completion of the procedures for supplying the linear accelerator device to provide radiotherapy service to patients at a cost of $US 4000 and the approval of projects that contribute to spreading awareness, activating the research aspect, and preparing a national strategy to combat cancer.

Earlier, the Cancer Patients Association organized a vigil in front of the United Nations headquarters in the capital Sana’a, denouncing the WHO’s disregard for the suffering of cancer patients and turning a blind eye to their tragic conditions.

The patients considered the WHO’s indifference to their conditions as collusion with the coalition of aggression that continues to commit crimes and unfair siege against the Yemeni people and deny patients’ rights to travel abroad for treatment.

They affirmed that the WHO has abandoned its responsibility and its humanitarian and legal role as well as disregarded the lives of many cancer patients and contributed to increasing the suffering by failing to fulfill its previous promises and obligations to provide medicines and specialized devices for radiation and magnetic resonance therapy, medicines, equipment and other devices in light of the increasing number of patients.