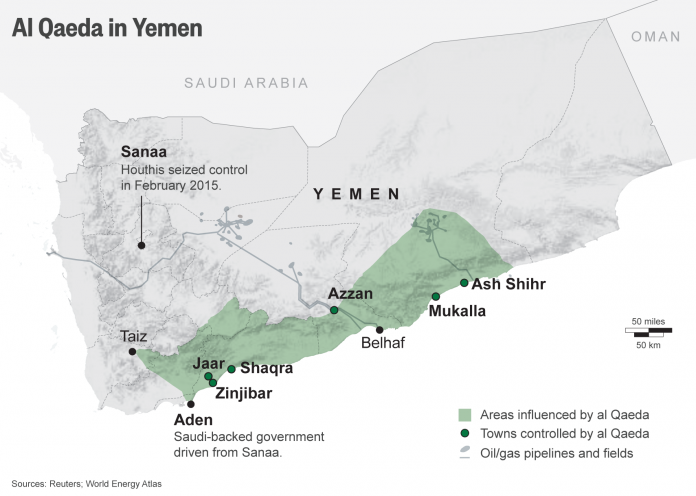 Saudi-led military intervention in Yemen backed by the United States, has helped Al Qaeda in the Arabian Peninsula (AQAP) to become stronger than any time since its first emerged almost 20 years ago according to Reuters report on 8 April.

Al Qaeda now runs its own mini-state, flush with funds from raiding the local central bank and levying taxes at the local port.

Once driven to near irrelevance by the rise of Islamic State abroad and security crackdowns at home, al Qaeda in Yemen now openly rules a mini-state with a war chest swollen by an estimated $100 million in looted bank deposits and revenue from running the country’s third largest port.

The report mentioned “Yemeni government officials and local traders estimated the group, as well as seizing the bank deposits, has extorted $1.4 million from the national oil company and earns up to $2 million every day in taxes on goods and fuel coming into the port.”

According to Reuters, AQAP boasts 1,000 fighters in Mukalla alone, controls 600 km (373 miles) of coastline and is ingratiating itself with southern Yemenis.

AQAP’s strength is growing in north Yemen; however, Saudi officials said that their campaign had denied terrorists in the area, in the recent statement issued by the Saudi embassy in Washington.

A senior Yemeni government official said the war in Yemen provided a suitable environment for the expansion of al Qaeda. He added “the withdrawal of government army units from their bases in the south, allowed al Qaeda to acquire very large quantities of sophisticated and advanced weapons, including shoulder-fired missiles and armed vehicles.”

Tribal leaders in neighboring provinces told Reuters that in the security vacuum, army bases were looted and Yemen’s south became awash with advanced weaponry. “C4 explosive and even anti-aircraft missiles were available to the highest bidder,” the source added.

On the waterfront, a thriving fuel smuggling network enriches AQAP daily in Mukalla port, “The group is experiencing a period of obscene, unprecedented wealth and luxury,” one resident of Mukalla told Reuters.

“You will find hundreds of oil trucks there smuggling fuel from one area to another where they are selling it,” said Basalmah in the report.

Tribal sources, residents and diplomats, told Reuters the militants gained control of the ports in Mukalla and Ash Shihr when they first stormed the cities in April last year. The militants began imposing tax and custom tariffs on shippers and traders.

Tribes who work with al Qaeda now control much of the country’s oil infrastructure. Six white oil tanks on a beach between Mukalla and Ash Shihr are linked by pipeline to the Masila oilfields which are estimated to hold more than 80 percent of Yemen’s total reserves.

To that point, A PetroMasila official said that small amounts of oil are still being extracted for use in provincial power generators. Total said it has not restarted operations. Nexen did not respond to a request for comment, according to Reuters.