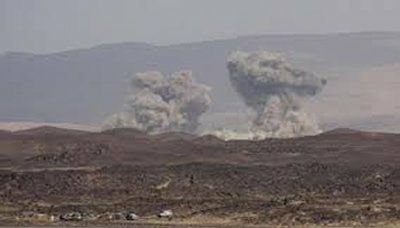 The Saudi-American aggression warplanes waged a series of airstrikes on a number of Yemeni provinces, while the mercenaries continued to bomb citizens’ property, infrastructure and public facilities during the past few hours.

A military source told SABA that the aggression warplanes carried out tow airstrikes on Beit al-Faqih directorate and two raids on the port of Haymeh in Hodeida province district, causing huge damages.

The same source indicated that the Saudi-American warplanes launched two raids on al-Zahir district and a raid on Razih district of Sa’ada Province, while the Saudi aggression rockets and artillery shells bombed al-Gore district.

According to the source, the mercenaries of the aggression bombed the citizens ‘ farms in the village of Ramada’a  in Nihem district with Katyusha rockets, while the warplanes carried out two raids on the same directorate, and a raid on Sirwah directorate of Marib Province.