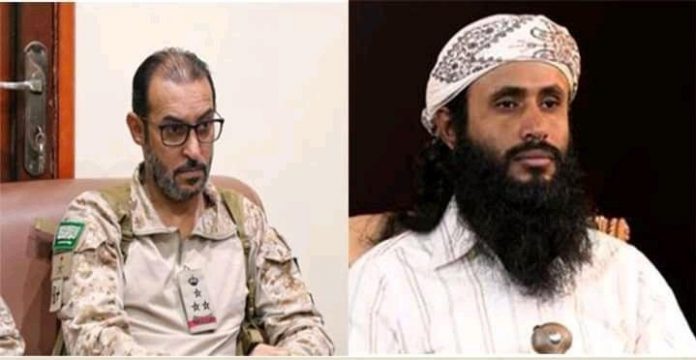 Although Saudi Arabia has repeatedly denied its support for terrorism in Yemen’s occupied provinces, its disagreement with the UAE-backed Southern Transitional Council (STC) has prompted the latter to reveal the significant support that Saudi Arabia provides to terrorist leaders.

Sources loyal to the STC leaked a document revealing that the commander of the Saudi -led aggression forces in Aden, Brigadier General Mujahid al-Otaibi, has given a permit to all military checkpoints in the provinces Aden, Abyan, Shabwah and Ma’rib, to live free passage to prominent al-Qaeda leader Saad bin Atef al-Awlaki, who is accompanied by the commander of the so-called General Transport Brigade of tje Presidential Guard of Hadi, Amjad Khalid al-Qahtani.

Regardless of the aim that the STC seeks to achieve by revealing this document at the moment, the document reveals the role of the Saudi regime in flooding Yemen with elements of al-Qaeda and Deash (ISIS) over the past years.

This document comes after Yemeni army forces and Popular Committees revealed pictures showing Saudi support for al-Qaeda and ISIS elements in the areas of Yakala and Qaifah, located in the Rada’a district of Bayda governor ate.

The photos show documents from the King Salman Center granted members of of terrorist organisations for the year 2018, in addition to other evidence of Saudi funds, modern cameras and communication equipment found in al-Qaeda and Daesh camps.

Since the beginning of the war on Yemen, Saudi Arabia, with the participation of its ally UAE, has turned Yemeni territory into a fertile breeding ground for al-Qaeda and Daesh. Terrorist camps have been deployed across the occupied Yemeni provinces, and terrorists have besn sighted fighting side by side with Saudi forces and mercenaries.