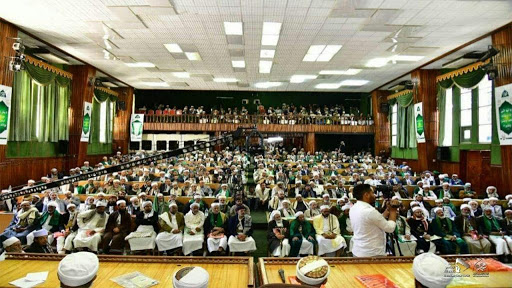 Yemeni scholars have called for strengthening Islamic unity, mobilizing and uniting the word and rejecting all forms of violence and extremism.

In a statement issued at the conclusion of the Yemeni Scholars Conference held in the capital Sana’a on Sunday, the scholars affirmed the necessity of adhering to the rulings of Islam and its glorious Sharia.

The scholars pointed out that it is the duty of everyone to consolidate the values of love, intimacy, tolerance, and the etiquette of Islam and its noble values of truthfulness, honesty, purity, integrity, chivalry, fairness, and fairness.

They noted the need to seize the memory of the birth of the Prophet, may Allah bless him and his family and grant him peace, to consolidate and glorify these noble values and virtuous morals in the hearts of Muslims.

The scholars stressed the need for scholars, preachers, orators, and thinkers to carry out their religious duty to educate, guide, and give advice according to the words of the Almighty.

They also called on the Salvation Government, the Ministry of Information, and the relevant authorities to take measures and steps and prepare studies to protect young people from intellectual invasion through the media that promote moral decay and religious atheism.

The scholars accentuated the importance of the conscious of Islam and the keenness to present the character of the Noble Messenger, may Allah’s prayers and peace be upon him and his family and grant them peace, the Qur’an presentation appropriate to the greatness of his personality, salvaging message, and the benefit of humanity in a way that contributes to strengthening the position of the Prophet in the conscience of the nation and the reality of humanity as a leader and role model in peace and war through Allah’s Holy Qur’an He presented to his messenger.

They renewed the call to the Islamic regimes and peoples, the pressure movement on France and its president to apologize for offending Islam and the noble Prophet or boycott French goods or its ties.

The scholars’ statement called on the scholars of the entire Islamic nation to condemn the regimes of the United Arab Emirates, Saudi Arabia, Bahrain and the Sudanese Military Council for normalizing their ties with the Zionist entity.

They also condemned the justification of some scholars affiliated with the regimes normalizing with the Zionist entity despite the clear and explicit contravention of the Book of Allah and the Sunnah of His Messenger.

The Yemeni scholars called on the Yemeni people to attend on the 12th of Rabi` al-Awwal, corresponding to 29 Oct. 2020 to commemorate the birth of the Prophet Mohammed in the capital Sanaa and various provinces.