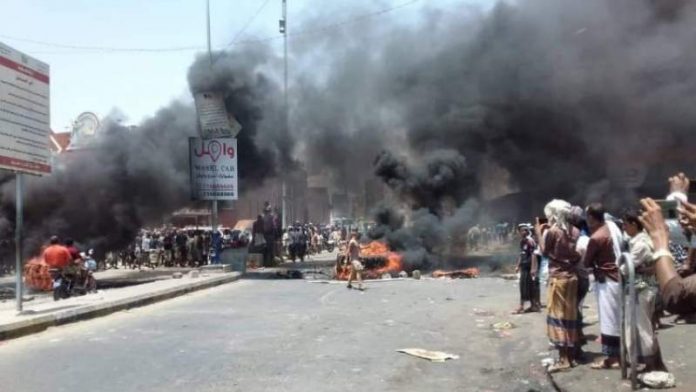 In the southern governorates of Yemen, popular movements against Saudi Arabia and the UAE occupation are escalated because of the deterioration of social services, the collapse of the riyal exchange rate and the exacerbation of the electricity crisis.

During the past few days, those occupied provinces witnessed protests denouncing the policies of the “US-Saudi occupation”, and demanding the departure of it and the trial of the pro-aggression government.

Once again, after more than fifty years, the slogan “Colonialism Must Go out from the Free People Land” returned to be heard in the southern governorates of Yemen.

Thousands, who received, by flowers six years ago, the military convoys of Saudi Arabia and the Emirates, protested during the past days in the streets of Aden, Lahj and Abyan, demanding the departure of the Saudi-Emirati coalition forces.

The demonstrations in Aden reached the vicinity of the Saudi forces military camp and the coalition headquarters in Al-Buriqa, while the outer walls of the Presidential Palace were stormed, where Saudi forces are residents.

“The Saudi grant announced by the government at the beginning of this year to support the electricity sector, with 420 million dollars, was nothing but a bogus grant,” sources in the mercenary  Hadi’s government told Al-Akhbar.

They explained that “against the popular pressures that began at the beginning of this year, Hadi government, after meeting of its representatives with the Saudi Ambassador, Muhammad Al Jaber, announced a Saudi fuel grant”.

In the meantime, it was remarkable that the UAE-backed “Security Belt” forces had received instructions not to clash with the protesters, while the Ministry of Interior of the Saudi-backed Hadi government directed to suppress them in Hadhramaut Valley and Shabwah.

It also issued a circular promising to hold accountable all the security services that were proven to be involved in supporting the demonstrations, and accused t