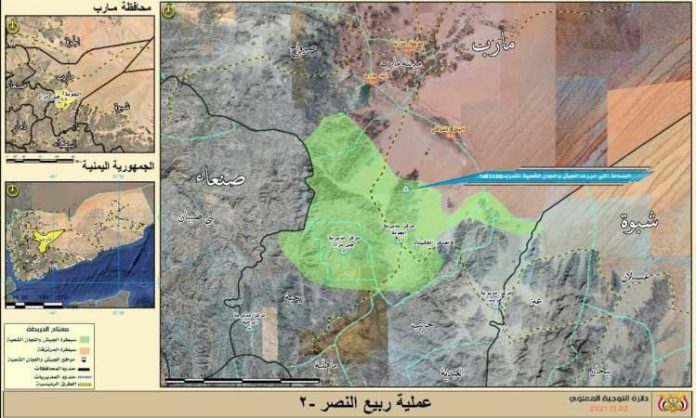 Yemeni Armed Forces spokesman, Brigadier General Yahya Sare’e has on Tuesday revealed the details of the second phase of Rabe’e sl-Nasr (Spring of Victory) operation and the recent developments in Marib province.

Brigadier General Sare’e confirmed, in a press briefing this afternoon, that the army forces and the Popular Committees managed to liberate al-Jubah and Jabal Murad districts, with an estimated area of 1,100 square kilometers, in addition to liberating Al-Amoud area. Furthermore, the Yemeni forces came near the al-Falaj point, the entrance to the city of Ma’rib.

The Saudi-led aggression forces suffered great losses, especially those who insisted on fighting, and those who left the fight were allowed to flee, the spokesman said, confirming that more than 200 troops were killed and over 550 wounded.

He indicated that the air defences succeeded in carrying out 86 operations to confront enemy aircraft, while Yemeni drones implemented 141 operations, of which 128 operations targeted the enemy in the occupied areas of Yemen, and 13 others in the Saudi heartland.

The army spokesman also confirmed that the missile force carried out 47 operations, 31 of which targeted the enemy sites in the occupied areas and 16 operations in Saudi Arabia.

“The army forces backed by the Popular Committees continue to advance towards the city of Ma’rib, amid the escape of the coalition mercenaries and their leaders,” Sare’e added. He assured that all necessary measures are taken to preserve the lives of citizens in the center of al-Jubah district and in the nearby villages and areas

Yahya Sare’e also affirmed that the Armed Forces, with the support of the local tribes, would continue their military operations to liberate all of the country, “until freedom and independence are achieved.

The army spokesman addressed the Saudi regime, saying, “Your war, which we do not call absurd but aggressively criminal, will return humiliation, shame and defeat on you.”