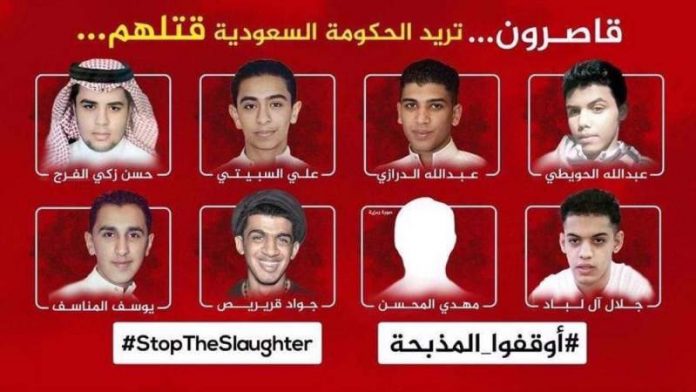 Human rights activists have warned that eight teenagers from Saudi Arabia’s Shia-​populated Qatif region in Eastern Province will soon be executed, as the House of Saud is adamantly pressing ahead with a heavy-handed crackdown led by Crown Prince Mohammed bin Salman against dissidents and anti-regime activists.

The activists have mounted a campaign under the Arabic hashtag “Stop the Slaughter” to demand the abolition of death penalties handed down to minors.

The activists pointed out that the General Prosecutor’s Office has sentenced Manasif, and at least five others, including a teenager named Sajjad Al Yassin, to death for apostasy – abandoning their Muslim faith, according to trial documents.

They went on to note that these six people are under trial in Saudi Arabia’s Specialized Criminal Court (SCC) since September 2019.

Manasif was violently attacked and arrested back in April 2017, near the so-called Qatif Court of Justice. He was walking in the street when Saudi forces opened fire and detained him, without providing an arrest warrant or any reason for the measure.

Saudi authorities allowed Manasif’s family to meet him only six months after his detention, and he was kept in solitary confinement during that time. He was tortured several times by Saudi officers, beaten unconscious, and then taken to hospital.

Among the charges leveled against him are participation in the funerals of political opponents, taking part in anti-regime demonstrations and chanting slogans against the Riyadh regime, attempts to incite sedition and disturb national security, encouragement of sit-ins, protests and gatherings with the intent to harm the country’s stability, affiliation to terrorist outfits and shooting at security forces.

Eastern Province has been the scene of peaceful demonstrations since February 2011. Protesters have been demanding reforms, freedom of expression, the release of political prisoners, and an end to economic and religious discrimination against the oil-rich region.

The protests have been met with a heavy-handed crackdown by the regime. Security forces have increased security measures across the province.

Since bin Salman became Saudi Arabia’s de facto leader in 2017, the kingdom has arrested hundreds of activists, bloggers, intellectuals and others for their political activism, showing almost zero tolerance for dissent even in the face of international condemnation of the crackdown.

Muslim scholars have been executed and women’s rights campaigners have been put behind bars and tortured as freedom of expression, association, and belief continue to be denied by the kingdom’s authorities.

Over the past years, Riyadh has also redefined its anti-terrorism laws to target activism.