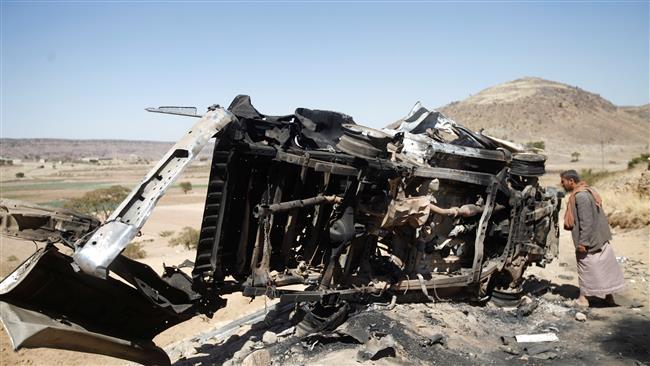 Saudi warplanes have targeted a civilian vehicle carrying 14 passengers in Yemen’s southwestern province of Taiz, killing all of its occupants.

The charred bodies of the victims were discovered after the Saudi airstrike late on Friday.

Saudi airstrikes against civilian targets and urban infrastructure on Friday overall claimed the lives of 30 people and injured 10 others in Taiz, Sana’a, and Marib provinces.

In response, Yemeni army forces launched missile and mortar attacks against the positions of Saudi mercenaries in the town of Maqbaneh in Taiz Province.

The Saudi war on Yemen, which local sources say has killed at least 11,400 people, was launched in an unsuccessful attempt to reinstate a former government allied to Saudi Arabia.

The Saudi war has also taken a heavy toll on the country’s facilities and infrastructure, destroying many hospitals, schools and factories.