Home Articles Yemeni coffee industry in crisis due to war 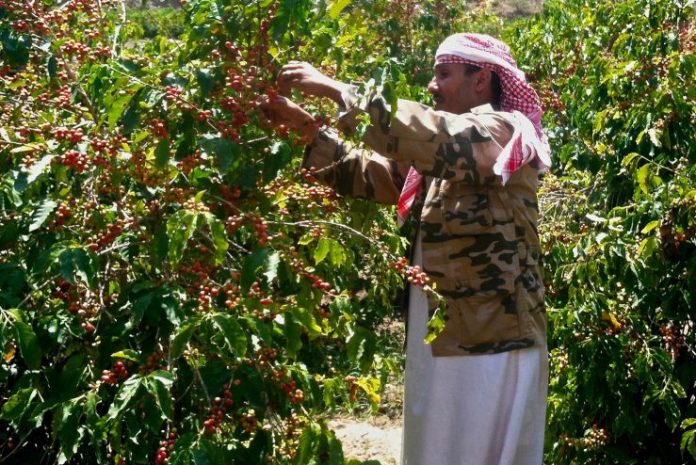 Yemen has always played a significant role in introducing coffee — the second most traded commodity in the world after oil — to countries throughout the world.

The Saudi-backed “government’s” disinterest in preserving the coffee tree and promoting its cultivation, however, has deprived the country of significant revenue.

Yemeni coffee in Turkey has an old and special flavor, Turkish people even have folk songs that celebrate Yemeni coffee.

Coffee beans are the seeds found in the fruits of red-crusted coffee. The fruit is dried and then the seeds are removed after drying and roasted to make coffee. The degree of roasting ranges from brown to black, and it is this roasting process that distinguishes one country’s coffee from another. Yemenis were the first to harvest coffee and consume the beverage on a wide scale. Their legendary Arabica beans are well-known throughout the world, and haven been for many centuries. Yemenis exported their beans to the rest of the world through the port of Mocha, which has led to the port city’s name becoming synonymous with coffee flavour.

The most reliable evidence of early knowledge of the coffee tree and coffee consumption appears in the mid-15th century in the Sufi monasteries in Yemen, south of the Arabian Peninsula. In the 16th century, Yemen began to export coffee to Persia, Egypt, Syria and Turkey, and gradually expanded to as many as 70 countries.

Mocha coffee beans are considered a luxury. Mocha is a famous Yemeni port on the Red Sea coast and an early hub for the coffee trade. Coffee from Mocha is known for the unique taste and high quality that distinguishes it from coffee types grown in other countries.

There are more than ten well-known types of coffee beans in Yemen, including al-Mutari, al-Harazi, Yafi’i, Al-anasi, Khulani, al-Bara’i, and al-Hammadi. However the al-Tufahi, al-Dawa’iri, and the Odani coffee are among the finest coffee beans that Yemen offers; these particular beans can thrive in any area where coffee is cultivated in the country.

Yemeni existence is so closely tied to the coffee tree that it is even celebrated in song. The great Yemeni singer Ali Alansi immortalized Yemeni coffee in his famous song “Coffee and Love.” “O Yemeni Coffee,” Alansi sings, “You are like treasure above trees.” The song’s comparison of coffee beans to treasure only serves to confirm the genuine love of coffee and the great economic, cultural, and historic value that it has brought to Yemen.

The 1980s marked the revival of interest in the cultivation and production of coffee by the Yemeni state. Coffee was considered one of Yemen’s main sources of income, with exports reaching roughly 50,000 tons per year, before falling to record lows now during the war, according to the Ministry of Agriculture in Yemen.

Coffee could become a major source of income for Yemen again. The Citizens are optimistic about the future. “If Yemeni coffee recovers its reputation,” he says, “it could have a great economic impact [on the country], because it would provide an income for a huge number of Yemenis and also create new opportunities.”

Yemen is known for its rich heritage, mild climate, picturesque scenery and distinctive coffee. However, just over four years ago, the start of a devastating civil war adversely affected the cultivation of coffee in the country.

The lack of oil and the prohibitive pricing of oil derivatives has disrupted the coffee production process. Yemeni farmers’ inability to carry out essential processes, such as irrigating the coffee plants, has made the production and export of Yemeni coffee “difficult and sometimes almost impossible,” according to Yemeni businessman Hussein Ahmed.

Since 2015, Yemen’s exports have experienced a sharp decrease as a result of the war, and the unprecedented military coalition intervention led by Saudi Arabia and the United Arab Emirates.

The land, air, and sea blockade imposed on Yemen by the coalition has limited trade to and from the country, causing coffee exports to have now fallen as low as 8,000 bags a year, or 528 tons (one bag weighing 132 pounds). Coffee exports have yet again gradually increased to 38,000 bags (or 2,580 tons) a year in 2017, according to the International Coffee Organization. This however is still far below the capacity that Yemen has for coffee export.

Even before the outbreak of the war in 2015, the impoverished country had not properly utilized its vast stores of the second-most traded commodity in the world after crude oil. Between 2000 and 2014, Yemen exported 55,000 bags (3,630 tons) of coffee beans annually. This is a small amount in comparison to Brazil, for example, whose annual exports during that same 14-year period reached 28 million bags.

Before the war started, Yemen’s coffee production was estimated to be at about 20,000 tons per year, most of it being consumed locally. Yemeni coffee is grown in an area of about 35 thousand hectares by 100.000 to 110.000 farming families,according to Samir al-Atmi, Director of the Ministry of Agriculture’s Coffee Department.