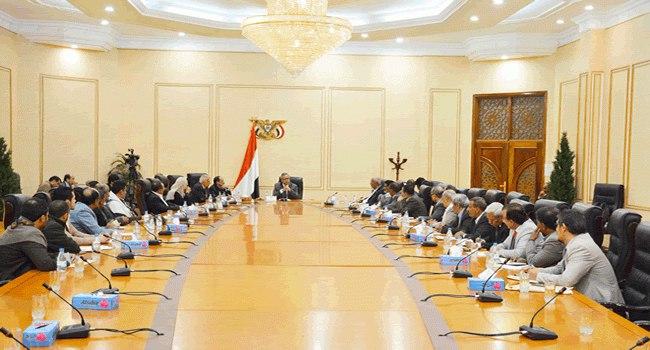 The Cabinet held a meeting on Wednesday, chaired by Prime Minister Dr. Abdulaziz bin Habtoor, has discussed further mobilisation in order to resist the occupation in the occupied southern and eastern provinces.

In the presence of the Shura Council Speaker Mohammed al-Aidarous, Advisor to the Presidency Major General Khalid Barras, Advisor to the Supreme Political Council Major General Ahmed Ali Mohsen, members of the Shura and Parliament from the southern and eastern provinces, and governors of those provinces, the meeting reviewed the general scene in the provinces that are still under Saudi-Emirati occupation.

The meeting dealt with a draft national plan of political, social and media work for the coming period in the southern and eastern provinces, as well as aspects related to implementing projects in these provinces, in the framework of the national vision for building the Yemeni state.

In the meeting, the Cabinet approved that the governors, each within the framework of his province, are to hold meetings with national, political, media and social figures in order to discuss the draft plan.

The meeting focused on the great responsibility shouldered by Sana’a towards the national cause, foremost among which are Yemeni unity and continued resistance against the occupation.