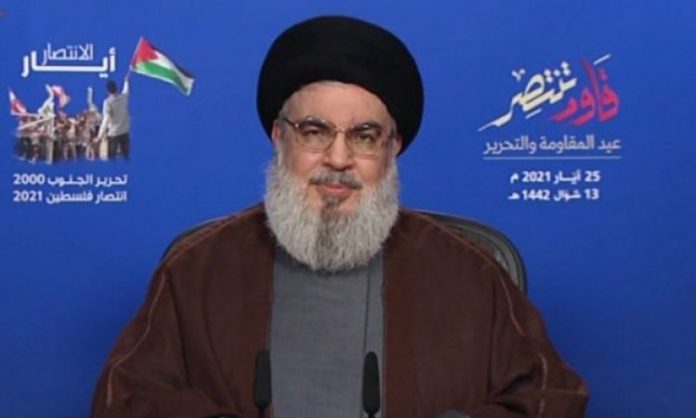 The General Secretary of Hezbollah, Sayyid Hassan Nasrallah has warned Israel of a regional war if it harms al-Quds (Jerusalem).

“You should know that attacking Jerusalem and the al-Aqsa Mosque is different from any other attack you are carrying out,” Nasrallah said in a speech on the occasion of 21st Liberation Anniversary of Southern Lebanon on Tuesday.

He added: “The Israelis must understand that carrying out attacks against the Sanctuaries will not limit the resistance to the border of Gaza.”

“The new equation after the recent confrontation is based on the fact that the attack on al- Quds and Al-Aqsa is matched by an armed confrontation.”

Sayyid Hassan Nasrallah congratulated the historic victory of the Palestinian Resistance Movement in Gaza against the Zionist crimes in the occupied lands and territories.

He lauded all leaders of the resistance movement in Palestine on the glorious victory of the Palestinian Resistance movement against the Zionist regime’s crimes and atrocities committed in the occupied lands and territories, including Al-Quds.

He noted that “the people of Gaza and their resistance were in a position of defence, and were prepared to make sacrifices for al-Quds and the Al-Aqsa Mosque.”

Sayyid Nasrallah pointed out that “the historical development in the Sword of al-Quds battle, is that Gaza entered to protect al-Quds and its people, and not only to protect Gaza.”

In conclusion, Sayyid Nasrallah assured that “Al-Quds is close and the end of the Israeli entity is closer,” saluting the stance of the Yemeni people in solidarity with Palestine.

“It brings tears to my eyes when I see the solidarity of the Yemeni people and their leader Sayyid Abdul-Malik al-Houthi, who addressed the Palestinians saying “we are ready to share our bread with you.”