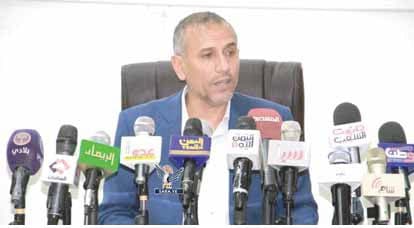 Yemen’s Minister of Transport Amer Al-Marani revealed on Sunday that the total damages and direct and indirect losses suffered by the land, sea and air transport sectors since the beginning of the aggression until March 2021 have amounted to 7,657,000,000 dollars.

In a press conference he held today, the transport minister mentioned that the estimated damages and losses that affected the civil aviation, meteorology and related sectors amounted to 5,277,000,000 dollars, while the direct and indirect damages and losses of the General Authority for Regulating Land Transport Affairs amounted to 208 million dollars.

The aggression caused damages and societal losses to the Yemeni Red Sea Ports Corporation, amounting to 2,160,000,000 dollars, while the damages and losses to the branch of the General Authority for Maritime Affairs in Hodeidah amounted to 12 million dollars, the. Minister added.

He referred that the number of deaths resulting from the closure of Sana’a International Airport amounted to 80,000 victims, as a result of being prevented from traveling to receive treatment abroad, in addition to more than 450,000 incurable disease cases who are in urgent need of medical care and treatment abroad and in direct danger of dying.

The Transport Minister held the international community, the United Nations and the Human Rights Council responsible for the repercussions of the humanitarian and tragic situation in Yemen, as a result of the aggression and siege imposed by the Saudi-led aggression coalition countries.

At the conclusion of the press conference, the Minister of Transport affirmed that the ministry and its affiliated bodies and institutions are “working with professionalism and technical readiness, despite the systematic destruction of infrastructure, devices and equipment.