Home Reports YPC: $12 billion in indirect losses during 2021 due to blockade 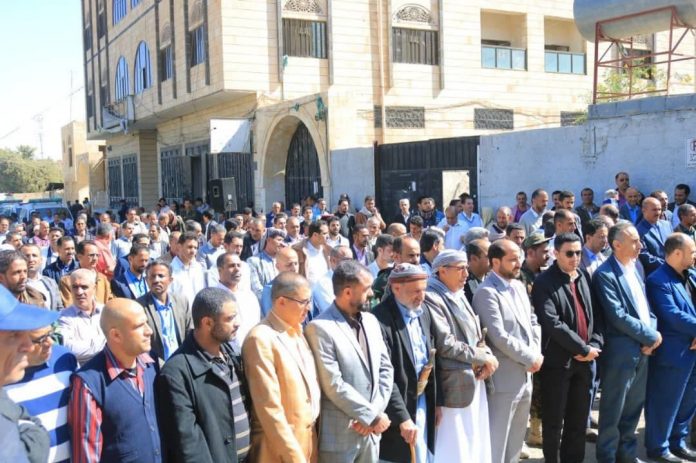 The company’s Executive Director, Ammar Al-Adhrai, explained, during a protest vigil organized by the Public Health and Population Office and the YPC in front of the United Nations office Monday in the capital Sana’a, that since the beginning of this year, the Saudi-led aggression coalition has allowed only two ships loaded with diesel and two others loaded with petrol to enter the port of Hodeidah for public consumption.

He stated that the released ships represent only four percent of the actual need in the normal supply situation.

Al-Adhrai indicated that there are studies issued by international universities confirming the futility of any aid to Yemen in light of the siege imposed on it, because the economy is receiving huge shocks due to the blockade, while the solution lies in lifting the siege.

The United Nations is aware of the suffering of the Yemeni people as a result of the aggression and the siege, indicating that the damages in the occupied areas (controlled by the coalition) exceeded hundreds of billions of dollars due to the collapse of the economic situation, he added.

The company Executive Director held the United Nations and the US-backed aggression coalition fully responsible for the repercussions of the blockade and maritime piracy on fuel ships and preventing them from entering the port of Hodeidah.

He indicated that a study is currently being prepared by a group of specialists and academics on the direct and indirect losses of the national economy due to the blockade, and it would be published during the coming period.

Meanwhile, the statement issued by the government and private health sector in the capital Sana’a condemned the continued detention of oil derivatives ships by the aggression coalition.

The statement pointed out that health facilities suffer greatly from a shortage of working hours due to the lack of oil derivatives. It noted that heart and cancer patients are dying due to the blockade, preventing the entry of medical devices, and the closure of Sana’a International Airport.

It called on the remaining human conscience in some neutral countries and organizations to stand by the Yemeni people and support them in breaking the unjust siege.