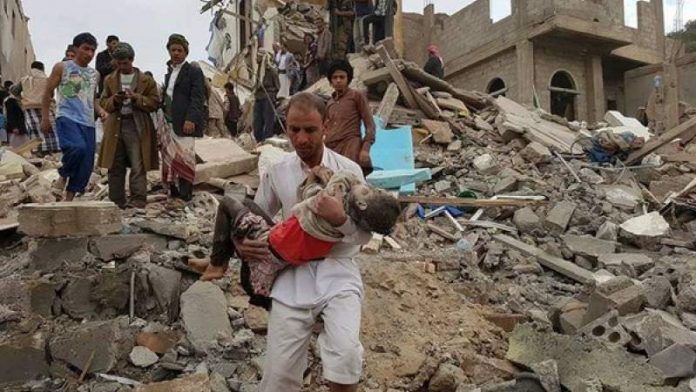 In an investigation, the French newspaper, Orian 21, mentioned the involvement of major French companies in killing children in Yemen, taking advantage of the war with the support of the French state, which is the most important arms supplier after the United States to the Saudi-Emirati coalition since 2015.
According to the investigation, in 2020, these licenses increased by 40% for the Kingdom of Saudi Arabia and 25% for the UAE.

The investigation confirmed that three major French companies and their contractors were involved in a conflict that killed over 13,000 civilians, namely, the Thales Group, which supplies combat aircraft and delivers ammunition, the French-British missile manufacturer MBDA, and Dassault Aviation, which maintains Mirage 2000 aircraft.

Since the start of the US-Saudi aggression’s military intervention against the Yemenis in March 2015, the French government has been trying to “deny its involvement.”

In January 2019, then-Minister of the Armed Forces, Florence Parly, told major national radio stations: “We have not recently sold any weapons that could be used in the Yemeni conflict.”

The minister claimed that the equipment handed over was only used “to ensure the protection of Saudi territory from Yemen’s ballistic attacks.”

A few months later, on April 15, 2019, an investigation by the Disclose website under the title “Made in France” proved the opposite, based on a report issued by the Military Intelligence Directorate.

French planes, helicopters, tanks and artillery did not participate in the coalition attacks only, but these weapons were used to target civilian areas, according to the investigation.

The investigation stated that the French government has so far refused to disclose the details of the weapons that have already been delivered to each foreign country.

However, its public reports submitted each year to Parliament highlight the importance of trade with two of the largest arms importers in the Middle East, Saudi Arabia and the United Arab Emirates, which are respectively the third and fifth largest customers of French arms.

These reports confirm that between 2015 and 2021, France delivered military equipment, munitions, and maintenance services about 9 billion euros to these two countries, which lead the aggression against the Yemenis.