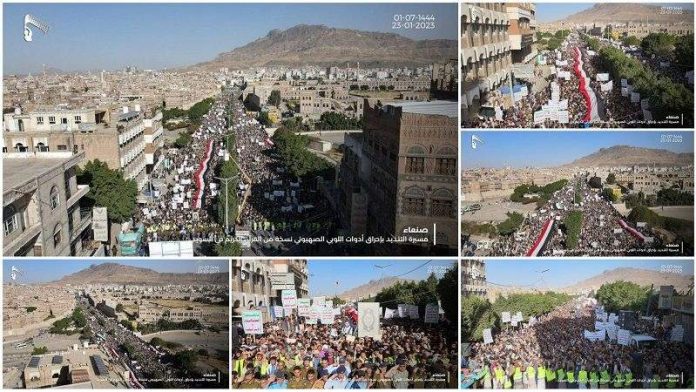 Millions of Yemeni angry protesters on Monday took to the streets of the capital, Sana’a and other Yemeni cities to denounce the desecration of the Holy Quran by the far-right Swedish politician Rasmus Paludan.

The participants raised slogans expressing anger and denunciation of the burning of the Holy Quran, and chanted expressions against this disgraceful extremist and immoral act.

The protesters, in a statement issued during the rally, affirmed that “ the crime of burning copies of the Holy Quran in Sweden,” labelling the measure as “hostile in the series of war against Islam and Muslims.”

The statement further accused the western-controlled Zionist lobby of standing behind the crime of burning copies of the Holy Quran, and called on “the western leaders and the international community to liberate themselves from the Zionist Judaism and to stop insulting the prophets, their books, and fighting their teachings.”

The statement stressed the need for the regimes of Arab and Islamic countries to adopt a unified position to put an end to these violations.

The protesters also demanded in their statement an official apology from the Swedish government as well as to hold the criminals accountable. “We call for boycotting Sweden and expelling its ambassadors from the Muslim countries for its criminal behavior against the sanctities.”