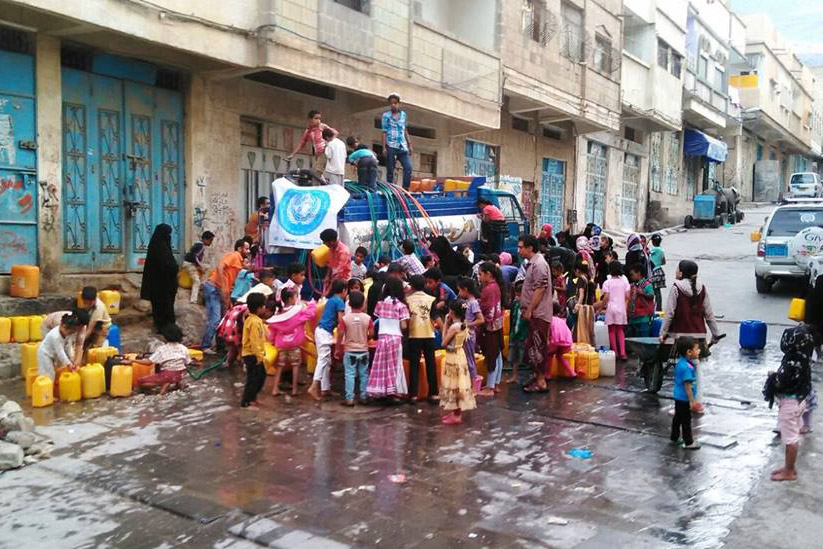 18 November 2015 – The United Nations said today that the ongoing conflict in Yemen has resulted in over 32,000 casualties, with people 5,700 killed, including 830 women and children, alongside a sharp rise in human rights violations – nearly 8,875 or an average of 43 violations occurring every day.

He added that approximately 14 million people lack sufficient access to healthcare, with three million children and pregnant or lactating women in need of malnutrition treatment or preventive services, and 1.8 million children have been out of school since mid-March.

“Overall, essential services are rapidly contracting due to the direct impact of the conflict and insufficient resources to pay salaries or maintenance,” said Mr. Van der Klaauw.

He further noted that the devastating conflict, which now has spread to 20 of Yemen’s 22 governorates, has led to a desperate humanitarian situation that has “drastically deteriorated” over the last seven months.

Mr. Van der Klaauw also said that the people of Yemen are now “grappling with a breakdown of essential services and forced displacement,” as nearly 21.2 million people, or a staggering 82 per cent of the population, are in need for some kind of humanitarian assistance to meet their basic needs or protect their fundamental rights, including protection of civilians and provision of essential services.

“We estimate that over 19 million people lack access to safe water and sanitation; over 14 million people are food insecure, including 7.6 million who are severely food insecure; and nearly 320,000 children are acutely malnourished,” Mr. Van der Klaauw told another press briefing held at the UN Information Centre in Cairo via satellite.

An estimated 2.3 million people have been forced to flee their homes and an additional 120,000 have fled the country, he added.

He also added that the most internally displace persons (IDPs) live with relatives or friends, placing a substantial burden on already vulnerable families and others live out in the open or have occupied public buildings.

Mr. Van der Klaauw noted that nearly 16 million people in Yemen were in need of some form of humanitarian assistance even before the conflict started on 26 March, due to years of poverty, under-development, environmental decline, intermittent conflict and weak rule of law.

The current crisis squeezed vulnerable communities and negatively affected coping mechanisms and further exacerbated the humanitarian situation owing to ‘an almost complete disregard for human life, with indiscriminate attacks against civilians and civilian infrastructure, he explained.

Mr. Van der Klaauw reported a drastic reduction in commercial imports, causing dangerously low availability of fuel, food, medicines and other essential commodities, which in turn has led to cutting of water pumping and trucking services and healthcare services and a dramatic increase in food prices along with the availability of less than an hour of electricity in most parts of the country.

Noting the depletion of basic resources, he urged the international community to relax restrictions on commercial imports, especially fuel, medical supplies and food.

At the same time, he reported that the Humanitarian Response Plan, launched in June by the humanitarian community to meet the critical needs of over 11 million people received $700 million of the required $1.6 billion.

“The plan has received over $700 million, allowing us to provide essential goods and services, including food, safe water and sanitation, healthcare, protection, shelter, household items and education to millions of people,” the UN official said, adding that the funds allow provision of food to 7.8 million people and enough medical supplies that provide 2.6 million Yemenis access to health care.

“We need to do more, and the UN and humanitarian partners are scaling up our efforts by establishing additional operational hubs across the country, in the most vulnerable areas. But much more needs to be done as the needs are fast outpacing the current response,” he said.

In closing, Mr. Van der Klaauw called on all parties to the conflict to “abide by international humanitarian law and to meet their obligations in protecting civilians and facilitating the provisions of rapid and unhindered humanitarian access.”