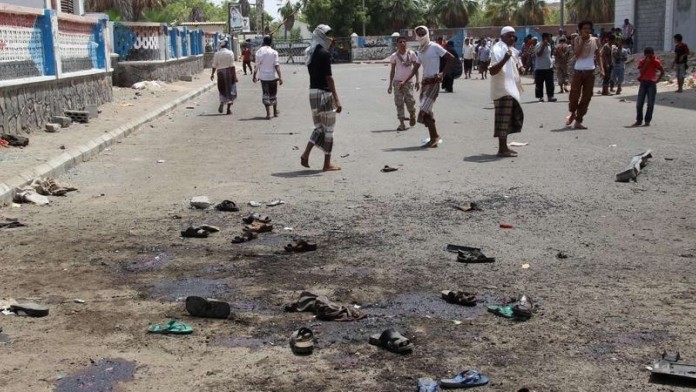 In May 2016, Amnesty International researchers investigated the remains of a partially detonated UK-manufactured BL-755 cluster munition in a demining centre in northern Yemen. Questions have been raised over whether the cluster munition could have been used during a former Yemen conflict.

The following evidence explains the circumstances and condition in which the cluster munition was found, underpinning Amnesty International’s conclusion that this cluster munition was used during the current (2015-16) Yemen conflict by a member of the Saudi Arabia-led military coalition.

The UK-manufactured cluster munition which Amnesty International documented in May 2016 were found in the village of al-Khadhra, in Haradh directorate in Hajjah governorate, some 40 km southwest of Sa’ada governorate. While Saudi Arabia conducted airstrikes in Sa’ada governorate during the six bouts of armed conflict otherwise known as the “Six Wars” between 2004 and 2009.

Furthermore, as a result of the “Six Wars”, over 250,000 people were internally displaced, many of whom moved to Hajjah for shelter and specifically to Haradh which is home to one of the biggest concentration of camps for Yemen’s internally displaced.

Analysis of the UK-manufactured cluster munition shows it must have been deployed recently during its field visit to Yemen, Amnesty International collected photographic and video evidence taken by local residents and by the local demining organization, the Yemen Executive Mining Action Centre (YEMAC), in Hajjah governorate of unexploded and partially exploded cluster munitions.

These photographs included images of the BL-755 in situ and captured not just the weapon, but also the impact crater and debris field. Amnesty International researchers also visited the YEMAC warehouse used for unexploded ordnance storage in Hayran in Hajjah governorate where YEMAC was storing the partially exploded BL-755 in question. An Amnesty International researcher photographed and videotaped the weapon on 7 May 2016.

Amnesty International has subsequently consulted with several independent arms experts who analyzed the video and photographic evidence collected by Amnesty International. By studying the images in question the weapons experts concluded that the remnant was of a BL-755 which had malfunctioned and bomblets in five of the original seven sections had neither dispersed nor detonated as designed. Amnesty International observed around a dozen bomblets were still inside in the crushed remains of the bomb casing and YEMAC had stored another 70 or so bomblets in the same warehouse indicating that 80 or so bomblets, more than half, failed to detonate. This resulted in the release of many extremely dangerous unexploded BL-755 submunitions.

Arms experts have confirmed to Amnesty International that examination of the BL-755 photographs indicates that the munition had been deployed relatively recently, most likely within the last few months. The metadata of the images Amnesty International obtained from local residents of the BL-755 in situ shows that the images were taken on 18 and 19 January 2016. The images clearly show that on 18 and 19 January the BL-755 submunitions were not corroded, which one would expect of a weapon that had been deployed years before.

Further, the impact crater was not degraded, which again would have happened over the course of several years. Instead, the BL-755 remained in situ protruding from the sand. The natural elements, wind, sand, and the presence of people and animals in the area make it unlikely that it would have remained undisturbed in this position for a period of many years, particularly as the area is routinely ploughed and farmed.

Moreover, upon reviewing the photographic evidence provided to them by Amnesty International, IHS Jane’s Defence Weekly, a leading UK-based journal on the arms industry, noted that the submunitions bear the same markings used by the UK Royal Air Force. Based on the condition of the BL-755 weapon in question as well as photographs of the locations in which the cluster bomb munition and submunitions were found, the evidence indicates that the BL-755 has been deployed relatively recently, most likely within the last few months.

Local testimony precludes dropping of UK-manufactured cluster munition before October 2015, and places it at end of December/early January 2016 interviews with five local residents further support Amnesty International’s assessment that the BL-755 was deployed during the current conflict in Yemen.

Amnesty International interviewed the owner of the farm where the BL-755 was found in al-Khadhra village in Haradh directorate, Hajjah governorate, as well as two of his sons who work on the farm, his nephew, also from the village and works on the farm, and one farm labourer who permanently resides on the farm.

The farm owner told Amnesty International that on 7 July 2015 his family, whose farm in alKhadhra is 6-10 km from the Saudi Arabian border, was forced to flee due to continued heavy fighting north of the farm. However, several labourers remained on the farm to work the land. One of these labourers, Ali al-Mahasir told Amnesty International that in late December 2015/ early January 2016 he headed to a plot of land 500 metres north of the farm to plough it and plant some trees after some rainfall.  When he arrived, he said he discovered a large number of unexploded submunitions and other munition debris.

In describing the impact site, he told Amnesty International he saw a hole that was approximately one metre deep and one metre across. He further described the hole as having bomblets “inside it and scattered all around it.” These bomblets were cylindrical and dark in colour. He also said there were springs scattered all around on the impact site and some of these cylinders had a shiny metallic cover while others were uncovered. This matches the description of the BL-755 and is similar to the images of the weapon taken in situ by other residents.

Amnesty International interviewed one of the farmer’s sons and his nephew who both said they took photographic and video evidence of some of the munitions, the impact site and debris after the strike. These photos were shared with Amnesty International during our field research in May 2016.

The metadata of the photographs shows they were taken on 18 and 19 January 2016 and Amnesty International has identified the weapon in the images as the BL-755. The farmer’s nephew also told Amnesty International that in February 2016 he visited the YEMAC warehouse in Hayran, requesting that YEMAC clear the BL-755 from his uncle’s land, which YEMAC did in April 2016, storing the remaining unexploded UK-manufactured submunitions in the Hayran Centre in Hajjah.

Evidence from research mission available online Evidence of the UK-manufactured BL-755 cluster munition is available online. This includes photographs taken by Amnesty International researchers at the YEMAC facility, photographs obtained by the Amnesty International researchers of the munition and submunitions in situ and video interviews with written transcripts with witnesses and demining workers.