Home Articles British Website :UK is a Key Element in the killing of Yemeni... 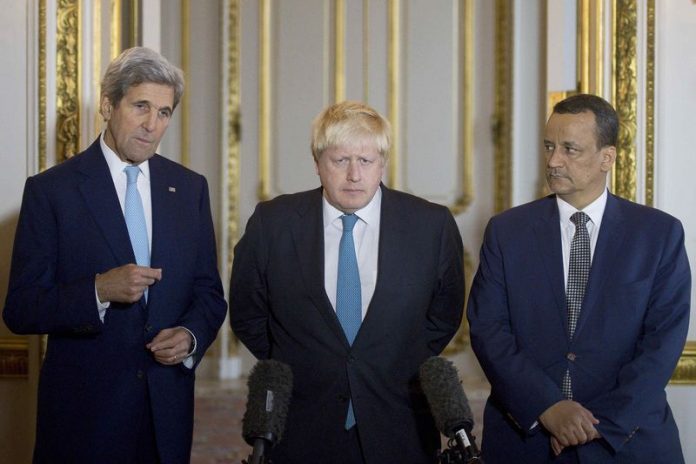 The British website “Declassified UK” published a report saying that hundreds of Saudi soldiers and other Persian Gulf countries had received their military training in Britain at a time when the Yemen war continued.

The investigative investigation revealed the British role and its relationship to the aggression against Yemen through data to train Saudi soldiers to lead the war militants that were used to bomb civilians in Yemen.

British soldiers have trained hundreds of Saudi-led coalition forces at other bases in Britain.

Declassified UK, a British organization that has been exploring Britain’s role in the world for a year, said that hundreds of Saudi soldiers have received training in the Royal Air Force”RAF” bases, noting according to data obtained from the British Ministry of Defense, that 310 Saudis have been trained in Six British Air Force military sites in England and Wales.

The site confirmed that the training of Saudi pilots continues, as some military courses take four years, while 90 Saudis receive training on “Typhoon” aircraft at Koningsy base in Lincolnshire, west of England in 2019.

While the British Ministry of Defense did not reveal the nature of the trainees, if they were pilots or crews operating on the ground, Saudi Arabia acquired “Typhoon” aircraft in a deal with “BE Systems”, the arm of the British army, at a value of 20 billion pounds.

The investigation stated that Yemen was subjected to thousands of raids carried out by coalition warplanes, which killed 785 civilians last year, including 77 children.

The investigation stated that 189 Saudis received their training at the Defense College of Oxford for technical training in Shropshire, western England last year, indicating that the British Ministry of Defense refused to reveal the nature of the courses that the Saudis had restricted to the College of Oxford, but that Saudis attended in times of previous courses on defense systems in particular Tornado, which is (fighters also used by the Saudis to strike and bomb Yemen).

The training of Saudi students continued despite the arrest of 2016 Saudi candidates accused of rape at the base.

In 2019, Wing Commander Jim Thorley, Chief Technical Training Officer at COSford, decided to resign “to take up a position in Riyadh, Saudi Arabia.”

Declasved.com reported that 10 small-level pilots entered initial flight training courses at the Royal Air Force base in Cranwell, Parkston Heath base in Lincolnshire and the Wettring base in Cambridge Shire, north of London in 2019, and in the same year, 30 Saudis also learned how to Fast aircraft driving at Valle Base in Anglesey, North Wales.

According to the site, a BAE Hawk aircraft is used for training the British and Saudi military at the Valey base, where the BAE employs 78 people.

A spokesman for the campaign against the arms trade, Andrew Smith, said that the war in Yemen “created the worst humanitarian catastrophe in the world” and “Britain was fully complicit in fueling the crisis.

The British-made fighters were important in the bombing and it appears that a large number of the people who led them were trained in Britain.

He added that the training is evidence of the warm and lasting political and military relationship between the British government and the Saudi regime. We were told that Britain is defending the achievement of man around the world, but it supports, arm and cooperate with one of the worst totalitarian dictatorships in the world.

In June 2019, the British government assured Parliament that it would not issue export licenses to arms to Saudi Arabia and the countries allied with it so that they would not be used in the Yemen war, but Minister of Commerce Liz Terrace apologized to Parliament in September 2019 because it allegedly allowed, according to its claim, the export of 180 spare parts for the Saudi signal weapon In clear violation of the court’s decision.

Terrace said, Ministry officials did not know that Saudi forces deployed in Yemen.

Directly and shockingly, Britain participated in feeding the Yemeni crisis and the war in the country which suffers from the worst humanitarian catastrophe in the world, and British warplanes participated in the bombing of civilian targets and killed civilians, including children.