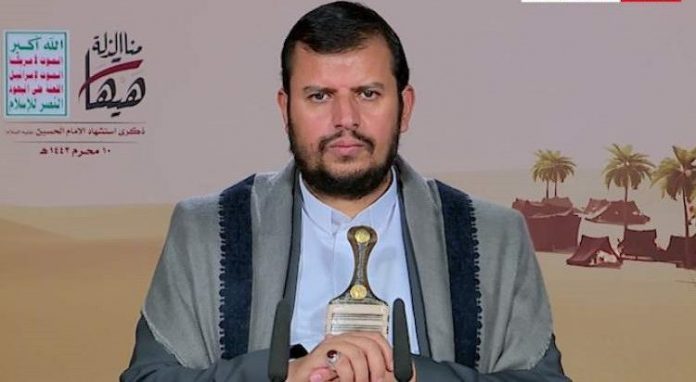 Sayyed Abdul-Malik Badreddin al-Houthi, the Leader of the Yemeni Revolution, has on Sunday denounced all forms of normalisation of relations with the Zionist entity, considering it to be a forbidden loyalty.

The Leader held a speech commemorating the holiday of Ashura and the anniversary of Imam Hussain’s martyrdom.

Sayyed al-Houthi pointed out that the Yemeni people have decided to adhere to Islam in its authenticity, and the fruits of freedom, independence and dignity it brings.

The Leader of the Yemeni Revolution pointed out that the independence and salvation from dependence is the approach of Imam Hussain, which represents the original message of Islam.

“On the day of the resolution of the choices and the adoption of the fateful decisions, we affirm that our position in confronting the brutal American-Saudi-Emirati Zionist aggression is a principled position, a holy jihad and a religious, humanitarian and national duty,” Sayyed al-Houthi said.

“By relying on and trusting in Allah, we will spare no effort in confronting the aggression, regardless of the level of challenges and the magnitude of the sacrifices. Allah is the greatest and is most capable of fulfilling his promise of victory, as long as our people continue to carry out their responsibility,” he added.

The Leader of the Revolution pointed out that the sacrifices, no matter how much they are, will never be as bad as the price or subservience.

“Our stances on the issues of our nation, especially the Palestinian cause, the attitude towards the Israeli enemy and American arrogance, are principled and do not accept compromising,” he said.

The Sayyed continued: “Our position of solidarity with the peoples of our nation in Lebanon, Syria, Iraq, Bahrain, the Islamic Republic of Iran and the oppressed Muslims in Burma, India, Kashmir and various other countries of the world, is an Islamic position of principle, and an essential part of our religious commitment. Our Islamic brotherhood with the free people of the world are part of our faith and our religious commitment,” Sayyed Abdul-Malik al-Houthi concluded.