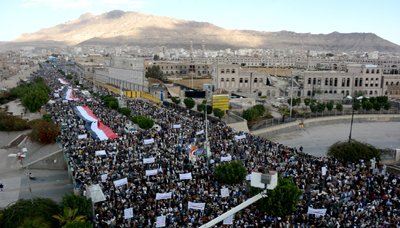 Althawra Net
March 2nd, Sana’a witnessed a public march to denounce Saudi-American crimes of on Yemen under the slogan, ” Naham Massacre Is An American Crime”.
The participants repeated many yells expressing their rejection of the American striving to increase the hanger of Yemenis via their direct targeting of the markets and trade centers as well as both public and private facilities that ended with a massacre in Naham market last Saturday that caused 32 martyrs and 41 injured citizens including women and children
They emphasized that these crimes committed by the Saudi-American aggression against Yemen will never discourage the Yemenis to face the aggression and offer more sacrifices to defend their home and get rid of its Invaders.
A statement was also declared during the march by the human rights organizations by the lawyer Taha Abu Taleb. Abu Taleb confirmed that NGOs in Yemen puts the responsibility on the United Nations towards the Yemenis suffering and extermination war committed by the aggression against Yemen.
NGOs has also reminded the security council that the main purpose of the United Nations is to maintain the international peace, security, protect freedom and all human rights.
Furthermore, NGOs condemned the cruel crimes, volition of international law and human contradictions by the aggression, claiming the United Nations, international society, and the free citizens to hurry up and interfere to stop this aggression.